An unusual market requires unusual methods, says WPP, the British multinational that became the first advertising and public relations firm to open a Havana office in 2015.

The most obvious challenge is the conspicuous lack of commercial advertising. Despite opening itself to foreign investment since the mid-1990s, Cuba still has no space for outdoor and TV ads.

Another challenge: The state monopoly that still prevails over retailing.

The hard-currency retail and wholesale infrastructure, imports, as well as pricing are controlled by the government, and it will likely stay that way in the foreseeable future, suggests a survey published last year by Boston Consulting Group (see sidebar). That study suggests there will be greater market access in the mid-term for foreign companies through wholesale channels, but that retail will remain reserved to Cubans.

“It’s the state that decides what’s available for consumption, not consumers,” notes Miguel Barroso, WPP project director in Cuba, in that company’s report. International brands “have to focus on the government, and once they’re given the nod by the government to import, then they become the only imported (product line) for that year or the agreed period. The consumer really has no choice.”

Coca-Cola, by way of Mexican exporters

Given the minimal commercial advertising in Cuba, Roth and Povey acknowledge that word-of-mouth — fueled by shipments from Miami-based relatives — plays a vital role in brand-building.

“Brands that haven’t been sold in this market for over 50 years – if at all – are known and are frequently in circulation,” they write. “Unofficial imports from places including the U.S., where many Cubans have relatives, deliver everything from fashion and footwear to personal care items and electronics. When brands ‘arrive’ for the first time in Cuba by official means, they must consider the fact they are not arriving to a brand landscape that is a blank canvas; availability may have been limited or non-existent, but often ‘new’ brands to the market find they already have a place in people’s minds.”

The Boston Consulting Group researchers recommend consumer goods companies build good relationships with government-approved suppliers in Cuba, and establish their brand among Cuban expatriates — for example in locations such as Hialeah, the most Cuban of Miami’s suburbs — to indirectly reach Cuban consumers, and take a long-term view.

The nearly brand-free environment, on the other hand, offers opportunity.

“There are so few multinational brands with an approved presence and proper distribution network in Cuba that to be one of the few permitted foreign brands brings with it a huge opportunity to stand out in consumers’ minds,” the WPP report says.

In the absence of commercial advertising, Roth and Povey stress a different brand-building strategy.

“In Cuba, unlike other global media markets, public relations and corporate social responsibility are the places to start, not finish, a brand communication’s strategy,” they say. “By doing good work that goes beyond selling products, in ways that match the government’s aspirations for its people, brands can open doors. Education, health and culture are all areas of high priority for leaders in Havana, and brands that share these ideals stand to gain.”

U.S. tech giant Google has made the most of this concept. In a partnership with Cuban artist Kcho, Google helped launch an art studio in early 2015 in the outskirts of Havana that offered visitors free WiFi, in a country where Internet access is expensive and slow. The Google Kcho studio receives a regular stream of visitors hungry for free WiFi and video chatting with relatives abroad. With the Google brand visible throughout that studio, it’s no surprise that some locals nicknamed it “Googlelandia”.

To be sure, within the Cuban market’s limitations, there is one area where commercial advertising exists.

“Point of sale signage, store signage for those that have a retail presence, or brand presence on packaging are the primary means,” said Ramiro Prudencio, president and CEO of Miami-based WPP subsidiary Burson-Marsteller Latin America, in an email to Cuba Standard. “In general, brands have been relatively cautious and have attempted to assure they respect Cuban legal and constitutional limits to promotion of commercial messages.”

This explains, for example, the widespread presence of Nestlé freezers at supermarkets and outdoor stands. Expanding the Swiss brand’s long-standing presence in Cuba beyond ice cream and sodas, Nestlé will soon begin to manufacture coffee, biscuits and cooking products in Cuba.

Roth and Povey didn’t ignore the unusual digital information flow on the island by way of flash drives. On a weekly basis, the people behind El Paquete distribute digital content, from pirated TV shows, films and news, to music, e-books, magazines, PC games, iPhone applications — and advertisements for local businesses and services.

Cuban web entrepreneur Ubaldo Huerta confirmed to Cuba Standard that his business, Fonoma.com, does advertise on El Paquete. He added that a growing number of small business owners do the same. Huerta doubts, though, that international companies will ever follow suit, due to El Paquete’s rudimentary delivery system.

Others have concerns regarding the informality of this brand-building option for foreign firms.

“As El Paquete is not officially sanctioned by the Cuban government, international businesses should be cautious about using this medium,” says Burson-Marsteller’s Prudencio.

One area that WPP and the Boston Consulting Group overlooked is trade shows. Cuban professionals and cuentapropistas make an effort to attend events like the Havana International Fair to learn about international consumer innovations, especially in electronics. In the fair’s last edition in November, huge crowds were attracted to the Samsung virtual reality section and to the stand of state telecom ETECSA, where locals inspected the latest cell phones. This also explains why international brands that want to expand their presence in Cuba, such as Pepsi and Brazilian flip-flop maker Havaianas, purchase booth space.

A survey of hundreds of Cuban consumers published by Boston Consulting Group last year that looked at purchasing capacities and habits, in addition to brand awareness, described Cuba as “one of the last true white-space markets on the planet”.

For the survey, the Boston Consulting Group pollsters personally interviewed 326 heads of households in Havana and 114 in Santiago.

In the near-total absence of advertising, foreign consumer goods companies will have to take a long-term view, use existing government channels, and resort to unusual methods to spread the word about their brands, the study suggests.

Authors Marguerite Fitzgerald, Jim Brennan and Russell Stokes conclude that consumer goods companies — while tackling stiff regulations and lacking infrastructure — should focus their attention on the “small but growing group of urban, increasingly affluent consumers who have access to private income that supplements their government salaries.”

Among the study’s findings:

In an effort to become one the first fashion brands to establish a presence in the country, Italy’s Benetton set up a retail store in Old Havana in 1993 – during the height of the island’s economic crisis. Luciano Benetton, the fashion label’s controversy-friendly president, knew that opening a Havana store at that particular time would generate international press, since the average Cuban could ill afford to buy its goods.

A Boston Consulting Group study picked three examples that show how to make the best of the current constraints: 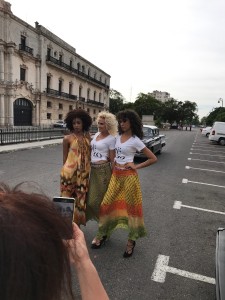 Foreign companies continue to use Cuba as an exotic stage to build their brands back home. In March, New Jersey salon owner Joe Ortiz went to Havana on behalf of emerging hair care brand Rë Zo and its social media marketing, to set up a photo shoot involving local models.

With the help of a trade consultant, Ortiz managed to hire Havana casting agent María Libia Batista Mora, who secured models for the Old Havana-themed fashion shoot. Ortiz was in good hands, since Batista Mora has experience not only with similar photo shoots for other U.S. brands, but with larger productions such as the upcoming Vin Diesel movie “Fate of the Furious”.

Batista Mora is currently doing casting for U.S. brand Joe’s Jeans. Before that, she conducted projects for National Geographic, and films like “Papa”, “Sin Alas”, and “Transformers”, as well as an unnamed TV series.

“Libia delivered exactly what we asked for,” said Ortiz. “She catered to our needs in such a limited time frame. She even allowed us to use her place to style the models, while making us feel welcome.”

Ortiz went to Cuba because Rë Zo sought the Old Havana backdrop, in its quest to stand out from its competitors. Ortiz admits that the comparatively lower prices Cuban models charge were a draw unto itself, especially compared to the rates in New York.

EEconomy
CUBA STANDARD — In a long-awaited move, the Council of Ministers gave the go-ahead to create a new…
EEconomy
CUBA STANDARD — The Cuba representative of the World Health Organization held talks with BioCubaFarma executives about emergency-use…
UUncategorized
The annual meeting of the Association for the Study of the Cuban Economy (ASCE) in Miami features a record number of presenters from Cuba