Amid freeze in relations, U.S. companies continue to lobby

New companies and organizations joined dozens of existing players in 2017, lobbying Congress and the Trump administration for openings to Cuba
0
Shares
0
0
0
0

WASHINGTON – As the Trump administration worked toward limiting travel to Cuba and banning U.S. commerce with certain Cuban companies, U.S. businesses lobbied to protect their interests on the island, and even exploit new opportunities.

According to filings with the U.S. House and Senate, there were new companies and organizations lobbying Congress and the Trump administration this year, joining dozens of other companies, many agriculture- and airline-related, that have lobbied many years for openings to Cuba.

The Roswell Park Cancer Center — one of the newcomers — hired Akin Gump Strauss Hauer & Feld this year for “government relations advice regarding Cuba policy,” paying the lobbying giant $200,000 in fees from January through September.

In late 2016, Roswell Park received permission from the U.S. Food and Drug Administration to conduct an early-stage clinical trial on a lung cancer vaccine developed by a Cuban cancer research institute, the Center of Molecular Immunology (CIM).

That clinical trial on patients with advanced lung cancer is now underway.

Associated Equipment Distributors (AED), a trade organization for companies that rent and sell industrial and farm equipment, were also a new organization lobbying on Cuba this year.

The association spent $190,000 on lobbying fees in the first six months of 2017. “Urg(ing) lawmakers to lift the trade embargo with Cuba,” was among the duties listed by the association’s in-house lobbyist.

Daniel Fischer, AED’s lobbyist, said he did not expect the members of his organization to do much trade with Cuba until the entire U.S embargo is lifted.

Yet a Caterpillar dealer and member of the association, RIMCO Cat, on Nov. 1 announced it will open a distribution center at the Mariel Special Development Zone, becoming the first U.S. company to have a physical presence in the high-profile development project.

Although the Trump administration’s new regulations bar U.S. deals that involve the Mariel Special Development Zone, the new rules allowed the Caterpillar deal because contracts inked before the regulations were effective have been “grandfathered in”.

Vacation rental portal Airbnb started to lobby on Cuba issues in May, and was rewarded with a carveout from the new Trump administration restrictions on individual travel to the island. The San Francisco-based company secured language in the new regulations that will allow U.S. travelers to stay in private homes, which are often listed on Airbnb, if they visit the island under the “Support the Cuban People” category (see box). 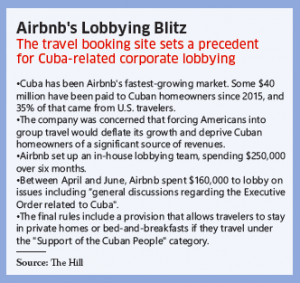 “Hosts in Cuba have welcomed guests from around the world, and these regulations will allow Airbnb to keep supporting individual Cuban people who share their homes. We’ll continue to review and comply with the new regulations,” said company spokesman Nick Pappas.

Of Airbnb’s lobbying, Pappas said that “we spoke with Democrats and Republicans in Washington regarding our community of hosts and guests in Cuba and around the world.”

In the last two years, Cubans who rented their homes through Airbnb earned $40 million. But 65% of Airbnb guests in Cuba in 2016 came from outside the United States.

Complying with the new regulations that U.S. travelers “support the Cuban people” may pose a challenge to many, because they will have to document that they spent most of their time on the island “enhancing contact with the Cuban people, supporting civil society in Cuba, and promoting the Cuban people’s independence from Cuban authorities.”

Rust-Oleum, long known for its rust-proofing aerosol paints, hired the LNE Group in October to represent them, because they “anticipate lobbying on issues related to exporting to Cuba.”

This wasn’t the first year John Deere had a lobbying interest in Cuba, but years of talks with congressional lawmakers and administration officials seemed to finally pan out.

At the Havana International Trade Fair on Nov. 2, John Deere entered into an agreement to supply farm tractors to Cuba, the first direct sale of U.S. machinery to Cuba in more than half a century.

The sale of farm tractors and implements to the Cuban agriculture sector will “improve food security for the Cuban people,” said Deere & Co. spokesman Ken Golden.

Overall, his company spent about $1.2 million on lobbying expenses in the first three quarters of this year.

Monitoring the Cuban assets control regulations, and monitoring legislation and amendments regarding “travel access to Cuba” was at the top of the hotel chain’s priorities list, according to the company’s filings.

The Trump administration’s new rules prevent U.S. travelers from staying at more than 80 hotels in Cuba, but exclude from that ban the Four Points Sheraton in Havana, which is owned by a state firm tied to Cuba’s military and managed by Starwood Hotels & Resorts Worldwide Inc., a Marriott subsidiary.

Honda North America was also among companies that for the first time disclosed it lobbied on “U.S.-Cuba trade” this year.

Even so, as a whole, lobbying by U.S. corporations on Cuba cooled off from the boom in 2016 that followed former President Barack Obama’s steps to normalize relations.

A number of companies that had listed trade with Cuba or easing travel restrictions as a lobbying priority in 2016 did not do so this year.

There could be a number of reasons for the drop-off, including the election of Donald Trump, the stalemate in Congress over the embargo and Cuba’s slow and limited response to U.S. business offers.

Among the companies and organizations that dropped off the Cuba lobbying list were Major League Baseball, Ingersoll Rand, Goodyear Tire, Colgate-Palmolive, Viacom and the Napa Valley Vintners Association.

Some of these companies may still want to keep an eye on U.S.-Cuba relations, but are leaving the lobbying task to trade associations such as the U.S. Chamber of Commerce, a lobbying heavyweight that has had an interest in normalization with Cuba for years.

Cuba to get new president two months later than planned

PPolitics
On behalf of The Washington Post, Bendixen & Amandi International surveyed 1,200 Cubans on a wide variety of topics. The poll produced a unique mosaic of opinions from the country, but the results have to be looked at carefully
PPolitics
Four events in the last 14 days illustrate how the region is being captured, probably irretrievably, by a new cold war that involves the United States, China, Russia and Europe
PPolitics
Claims, human rights, Guantánamo, U.S. policy programs, Radio Marti, aviation and telecommunications are on the agenda, as Cuba insists that all U.S. sanctions must be lifted.