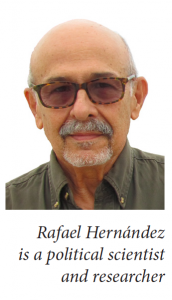 Ieyasu Tokugawa, founder of the shogun dynasty that governed Japan during the Edo era until the Meiji Restoration, stepped down in favor of his son at the age of 64. Suspicious of the daimyōs (“great names”), the lords who followed his authority but maybe not that of his son, Ieyasu remained as “retired shogun,” backing his son with his presence and advice until his death 11 years later. Ieyasu´s main legacy was depicted in a guiding document, a sort of magna carta that set the course of the country for the next 250 years.

Even in locations, cultures and histories very far from that archipelago, this lesson of political wisdom by the founder Ieyasu continues to speak to those who want to read it 400 years later.

Some scholars have described the principal work of Raúl Castro as that of the architect of Cuba’s security and defense during more than half a century; others have characterized him as promoter of “economic reforms” and of the institutional renewal of the system. Some “observers of the Cuban political situation”, perceive him as a sort of tropical Deng Xiao Ping to be celebrated for what they consider a well-intended but stalled liberalization project towards a market economy model, in a “thoroughly disappointing” way.

I lack the space to discuss these visions here, so I am limiting myself to commenting on his leadership in the introduction of concepts and practices aimed at the political transformation of socialism in the island, particularly, naturalize reforms, make consultation with the citizens a regular practice, and developing a dialogue based on negotiation and no preconditions with the North, as legitimate and permanent socialist policies.

Any of the few million Cubans who discussed the documents that were finally approved in the 6th (2011) and 7th (2016) Congress, and the First Conference (2012) of the Communist Party of Cuba will corroborate that these reflect a socialism very different from the one that had been championed until then. Whoever makes the effort of reviewing those documents will hardly be able to interpret them as a path towards some “Sino-Vietnamese socialist neo-patrimonial model ” or social democratic model. In this other socialism under construction, based not only on economic formulas, the new ideas and political style have Raúl Castro’s brand. It is sufficient to read his speeches and examine his decisions to form a precise idea.

Today, some “observers” keep repeating that Fidel was the doctrinaire ideologue, the diehard, contrasting with Raúl, the realist strategist. However, when the hand-off happened in summer 2006, these images were exactly the opposite. At the time, a high-ranking Church leader confessed to me his fear that the progress achieved with Fidel will be frozen with Raúl. The space and visibility the latter eventually conceded to that Church on certain political topics exceeded all expectations — which the subsequent Church hierarchy seems to have forgotten.

Even before taking power, Raúl had declared that “no one can govern like the founder of a revolution”, anticipating that the instantaneous consensus would be extinguished together with the founder, and that from then on, it would have to be fostered. His contribution to renewing the socialist ideology began precisely by naturalizing disagreement, considering it an organic part of a new consensus. To prove it, it is enough to point out how many expressions of dissent identified as “contra” in the early 1990s today are, on the level of society, “within” the socialist discourse — although some pedagogues still refuse to see it this way.

The foundation of this transformation of the system is not rooted in the mere modernization of the development strategy, but in the construction of a prosperous, sustainable and democratic socialism, based not only on a new mentality and practices in the economy, but also in politics. This shows up repeatedly in Raúl’s discourse, such as the need to “hold a dialogue with the citizens” (a more frequent term in his speech than with “the people”, and never with “the masses”), consulting with them the main policies , confronting the bureaucratic layer resisting change, the ineptitude of the media, and the stiff style of political education and ideological work (what he calls “the old mentality”).

His performance in charge of the unified command of defense and security of the country didn’t seem to herald the idea that “our worst enemy isn’t imperialism” nor its allies in the island, but rather “our own errors”, and “narrow and excluding views”. Nor did anticipate his advocacy for a decentralized system, collegiate decision-making, or the right to disagree “of which no one should be deprived”, a “debate without ties to dogmas and unviable ways of thinking”, the eradication of “secrecy surrounding information about all that defines the political and economic course of the nation”, of the “psychological barrier formed by resistance to change, indifference”, which impedes “transforming erroneous and unsustainable concepts about socialism”, the bad copying of “other socialist experiences”, or the need to “not ignore even the positive ones of capitalists”.

This democratic intention does not recognize sacred zones. It affirms that in order to continue having one sole party, “the Party of the Cuban Nation”, it must be “the most democratic”, “lead by example in its own ranks”, be able to “promote the greatest democracy in our society”, which “will contribute to overcoming attitudes of pretention and opportunism that came about under the cover of false unanimity and conventionalism”. It is necessary” for us to get used to telling the truth to each other’s face, disagree and discuss, even what the bosses say” and “banish lies and deceit from the behavior of officials on every level”.

Nor are there any untouchable documents or plans. “The program of the revolution must be updated every five years in order to always respond to the true interests of the people”. It must not be read as “a completely finished work, nor through a static or dogmatic prism”, but rather as “a guide to continue advancing in the reforms of the system”, including the conceptualization of socialism itself. “This way, the permanent perfecting and deepening of socialist democracy will be assured”.

From this background of new visions a set of policies has emerged that foreshadows the new model — although many are still awaiting legislation to formulate and materialize them. The agenda of law projects aimed at shaping this new order includes structure and powers of municipalities, small and midsize enterprises, elections, public-sector enterprises, a family law, associations, religion, and numerous other topics that must be debated and approved by a National Assembly whose legislative activity will overtake that of the Council of Ministers.

The regeneration of the political class

The renewal of leadership is at the very core of Raúl’s legacy. Raúl himself has put on the table a rule without precedent (“to limit to a maximum of two consecutive terms of five years the holding of principal political and state posts”) that has to await a constitutional reform for its establishment. However, the application of this rule, in fact, has already begun. 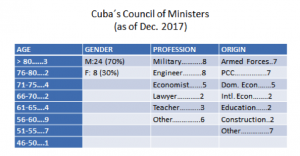 The 17-member Politburo of the PCC that emerged from the 7th Congress is the first whose members occupying professional positions— in defense, economy, foreign policy, public health, science and technology— exceed the number of career politicians. Among the professional politicians (eight), five come from leadership positions in the provinces, and three entered the Politburo under Raúl. This pattern that channels provincial PCC and assembly leaders to the highest national level is also part of his legacy.

Although some “political observers” dedicate themselves to predicting the “generational change after Raúl” for April 2018, it has already occurred in plain sight. In 2016, the average age of the PCC Central Committee was reduced from 59 to 54, and the relative representation of women and non-white members rose. In the institution in charge of day-to-day governing, the Council of Ministers, only four members are age 80 and older, and the age median is between 56 and 60 years. In other words, more than half of the ministries and central institutions are run by persons younger than 60, coming in equal parts from the Party leadership, state economy and armed forces, and — to a lesser extent — from education.

In this new order in progress, where the replacements are already governing and whose main parameters are established, Raúl’s legacy is undergoing its trial by fire. The lessons of lucidity and determination inscribed in his leadership, his presence and backing for the new government, are factors difficult to exaggerate, as well as his contribution to an expected reformed magna carta that may last and be respected by his inheritors. Even so, the challenges to build this democratic socialism are by no means smaller. To put it in the founding fathers´ terms, a sense of the historic moment [Fidel, 2015], and interpreting the interests and desires of the people [Che, 1965] are required.

Nothing more, nothing less.

Amid freeze in relations, U.S. companies continue to lobby

PPolitics
Embassy opening redux: It's up to Cubans to determine their own future, and Cuban Americans now will have to look at Cuba's laws if they seek redress
PPolitics
CUBA STANDARD — As the Biden administration has failed to lift sanctions imposed by the Trump administration that…
PPolitics
During a speech in Miami, National Security Advisor John Bolton announced an expansion of the "Cuba Restricted List". According to the Miami Herald, Trump is also pondering to activate Title III of Helms-Burton