CUBA STANDARD — With Secretary of State John Kerry, Secretary of Commerce Penny Pritzker, Agriculture Secretary John Vilsack, and Small Business Administration chief Maria Contreras-Sweet — as well as the First Lady and his two daughters — in tow, Barack Obama is scheduled to arrive in Cuba March 21. His two-day visit, the second ever of a U.S. president to the neighboring nation, will be heavy on symbolism, and his administration is scrambling to create more openings and thus practical results.

Through the state visit during the waning months of his second term, the 44th U.S. president will try to make his normalization policy “irreversible”, in part by creating facts in the shape of business, explained Ben Rhodes, Obama’s deputy national security adviser, in a recent press briefing.

“If businesses are starting to operate there, they don’t want to be told to shut down,” Rhodes said.

But so far there has been little actual business, either for U.S. corporations, private entrepreneurs in Cuba, or third-country companies.

Over the past months, the administration has scrambled to create openings for business, most notably through an aviation arrangement and by de-penalizing the dollar use with Cuba.

Apparently trying to underline Rhodes’ point, 10 days ahead of the visit, a U.S. official leaked to media that AT&T, Marriott International and Starwood Hotels and Resorts Worldwide are about to sign deals with Cuba. The mobile telephony provider apparently wants to obtain a roaming agreement with state telecom ETECSA (something competitor Sprint has already done in November), but the two hotel chains apparently would like to manage hotels in the island. Achieving the latter would be a breakthrough, but it isn’t clear how this could be structured within existing U.S. embargo laws.

Even if these hotel plans materialize, there will be only a handful U.S. operations that would have to shut down if Obama’s successor were to revert the limited openings.

The main obstacle remains, in the shape of sanctions codified in law. As a Republican Congress resists moving towards easing sanction laws, the Obama administration’s limited embargo-easing measures — combined with Cuban reluctance or inertia — have provided few tangible openings for the emerging Cuban private sector, foreign investors, and U.S. businesses.

One of the biggest difficulties in doing business with Cuba is the reluctance of third-country banks to engage with the island, after a record-breaking series of U.S. penalties, in part over dollar use in Cuba-related transactions.

A set of measures announced March 15 — described as “significant” by the administration — remove a big obstacle not just for U.S. banks.

Most importantly, the new amendments to the Cuban Assets Control Regulations (CACR) and Export Administration Regulations (EAR) disable the main “torture tool” used to scare foreign banks out of Cuba. Effective immediately, Washington will ease enforcement against offshore banks regarding the use of U.S. dollars in transactions involving Cuba by offshore banks. 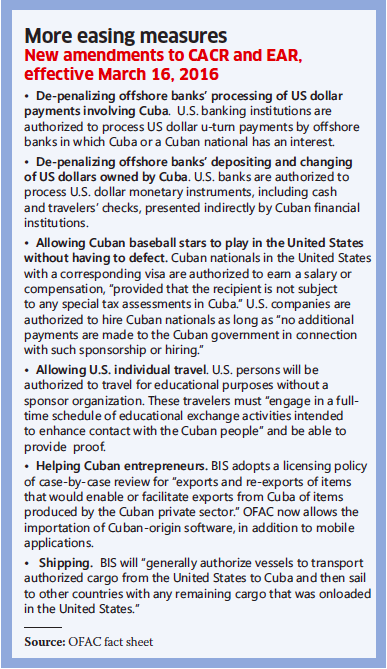 One of the amendments published by OFAC allows U.S. banks to process “U-turn payments” in U.S. dollars between third-country banks and Cuban entities. Another measure allows U.S. financial institutions to process dollar-denominated monetary instruments such as cash or travelers checks. This enables Cuban entitites to change dollars into other currencies or deposit them in dollar-denominated correspondent accounts at third-country banks.

These measures have the potential of enticing foreign banks back to Cuba, after record-level enforcement under the Obama administration has driven them off the island. They could also ease day-to-day operations of businesses in Cuba — particularly tourism — that still collect revenues in dollars, and Cuban purchases abroad made in dollars.

The measures are a turnaround from previous policy. In 2014 and 2015, the United States imposed record fines on French, German and Italian banks, and just weeks before his visit, the Office of Foreign Assets Controls (OFAC) fined two oil services companies — one French, one U.S. — for activities related to Cuba dating back to 2010-11.

In the meantime, the administration is trying to increase space for business. The opening with the biggest business impact so far is the non-binding “arrangement” the United States and Cuba signed in February, allowing U.S. airlines to bid for 110 flights per day to 10 Cuban airports. Bidding U.S. airlines had a window through March 2 to apply for routes with the U.S. Department of Transportation (see article page 9), and recent comments suggest that Cuban authorities will approve some or all of them, in a matter of months. This gets major U.S. airlines directly involved and will likely help increase U.S. visitor numbers gradually, but the arrangement does not provide for Cuban carriers to fly to the United States, and technical details have yet to be resolved. Reciprocal treatment has been paramount for Cuban officials.

Another concession Obama will bring in his luggage is the Cleber LLC venture that plans to assemble tractors at the Mariel Special Development Zone. The startup, founded by a pair of U.S. entrepreneurs — one of them with Cuban roots — has received green light from sanctions enforcers in Washington, and final approval by Cuban authorities is very likely. If Saul Berenthal and Horace Clemmons succeed in starting production at Mariel, this would be the first U.S. manufacturing enterprise in Cuba in more than half a century. However, the undertaking is fairly modest, and from the get-go it is mired in red tape. The pair has to overcome major obstacles and pitfalls, ranging from securing a steady supply of U.S.-made components, to making sure none of their tractors will be used by state entities, to finding enough private farmers to buy their tractors, to obtaining permission in Washington and Havana to offer credit.

Finally, Miami-based cruise giant Carnival Corp. is planning to begin seven-day cruises to Cuba May 1 through a new brand, Fathom. As of mid-March, Carnival was still awaiting Cuban authorities’ approval.

Also, Barack and First Lady Michelle Obama are scheduled to attend a Tampa Bay Rays exhibition game March 22 at the Estadio Latinoamericano in Havana against a Cuban all-star team. His presence at the MLB team’s game — the first in Cuba since 1998 — underscores that Major League Baseball’s argument (that U.S. sanctions regulations compel it to force Cuban players to defect if they want to join MLB) is no longer valid, and that the White House supports the two sides coming to terms over how Cuban talents join professional baseball in the United States. MLB is expected to make an announcement during the Obama visit.

The most glaring absence so far are any major openings for U.S. telecommunications companies, despite the Obama administration’s emphasis on that particular sector. Eager U.S. telecoms are seeking opportunities in the largely untapped market of 11 million, but they are squeezed between U.S. sanctions, Cuban fears of regime-change intents and NSA-style snooping, and a state-controlled economy. Beyond one run-of-the-mill long-distance telephony and one mobile telephony roaming agreement, no U.S. information technology company has secured any agreement, despite a reported offer by Google to help Cuba leapfrog to wireless Internet infrastructure, and at least a half-dozen proposals by U.S. and other companies to lay undersea cables from Florida to Cuba.

Cuban officials told a U.S. telecom delegation in January they would take U.S. proposals under consideration, but that IT and telecom investments were currently not their top priority, suggesting that Cuba wants “to move move forward in its own way”, the head of the U.S. delegation told reporters afterwards.

And finally, ferry service between Florida and Havana is still held up by a lengthy approval process and lack of infrastructure in Cuba. At least half a dozen potential operators are on standby, waiting for green light to their ferries. 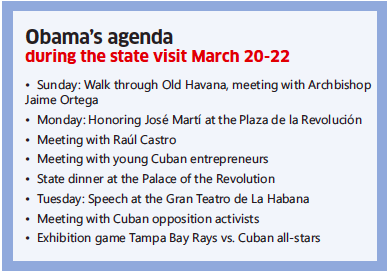 How to ease financial sanctions 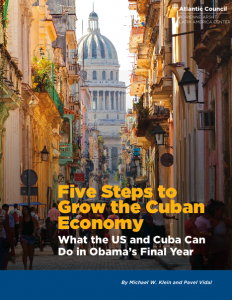 To help the Cuban economy grow and create more facts on the ground, the Obama administration could follow five recommendations, suggest economists Michael W. Klein and Pavel Vidal in an Atlantic Council essay.

Small-scale lending and micro finance: The United States should liberalize the rules allowing banks and microfinance NGOs to operate in Cuba. The Treasury Department stated in January 2015 that a limited range of U.S. projects that support microfinancing in Cuba will be allowed, although no projects have yet emerged. A broader range of U.S. banking services for Cubans are still prohibited. These prohibitions should also be eliminated, although the Cuban’s government’s willingness to allow the presence of U.S. banks is uncertain.

Banking services for depositors: It is not the Cuban government alone that is keeping foreign bank branches from serving the Cuban people. The United States does not allow its private banks to provide financial services for Cubans in Cuba. Banks in other countries also face possible U.S. sanctions if they operate in Cuba. The administration could facilitate the development of financial services in Cuba by removing its rules preventing banks from serving the Cuban people, and by making it clear that, with the elimination of these rules, foreign banks operating in Cuba will not be subject to U.S. sanctions or fines. Finally, the United States could help the development of modern banking and mobile banking services in Cuba by allowing its companies to provide technology services, now prevented by the embargo.

International integration: The United States could help its own companies by eliminating restrictions on financing trade with Cuba. More clarity on what is and is not allowed would also mitigate U.S. financial institutions’ fears of engaging with Cuba. The United States could help promote the provision of finance in Cuba by further easing restrictions on U.S. accounts for Cuban nationals to enable them to use these accounts while in Cuba, not just while outside the island.

•Financial liberalization: The administration should remove barriers to the Interamerican Development Bank (IDB) providing assistance to Cuba. There are various avenues to do this, including a U.S. abstention at an eventual IDB board of directors vote on whether to include Cuba, or by declaring IDB cooperation with Cuba to be in U.S. national interest. The second approach could constitute a back-door way to getting around the multiple laws prohibiting U.S. support for financial institutions that engage with Cuba.

•Currency unification: Such a move would also enable both the IDB and the International Monetary Fund to provide much-needed technical assistance. Another option, which avoids any U.S. legal ramifications, is for regional development bank Corporación Andina de Fomento (CAF), of which the United States is not a member, to take the first step to oversee technical assistance to Cuba.

Analysis: Cuba and the clamor for claims

TTop Stories
CUBA STANDARD — A high-ranking Cuban official told a group of British businesspeople that the changes foreseen in…
TTop Stories
Venezuelan-Cuban petrochemical projects worth billions of dollars are materializing around the port city of Cienfuegos, just when recession-stricken…
TTop Stories
As part of an agreement that includes record fines of $8.97 billion to settle allegations it used U.S. dollars in transactions with Cuba, Iran, Sudan and Burma, French bank BNP Paribas promised U.S. enforcers to terminate all business with U.S.-sanctioned countries "in any currency."