As second COVID-19 wave is easing, Cuba speeds up reopening of economy, tourism 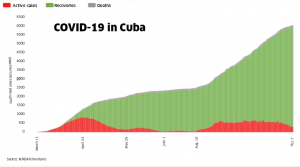 CUBA STANDARD — As a second wave of contagion is beginning to flatten, but before reaching the benchmarks set by a plan conceived in July, President Miguel Díaz-Canel on national TV announced the end of a lockdown in Havana, saying that it is time to “coexist with the disease” and restart the economy.

The lifting of the lockdown in Havana after one month — with an end to 7 pm-5 am curfews, resumption of public transit, and reopening of restaurants, theaters, movie theaters, and other cultural venues — was received with a collective sigh of relief.

The easing also includes reopening most of the island to international tourism and the opening of all airports to international flights. The exceptions, for now, are Havana — the city with the highest number of COVID-19 cases — and the provinces of Ciego de Ávila and Sancti Spíritus, which entered lockdowns in October to counter outbreaks. The airport in Cayo Coco in Ciego de Ávila province only allows tourists on flights, for the duration of the lockdown.

Before Díaz-Canel’s appearance Oct. 8 on the Mesa Redonda TV show, officials announced that Varadero — Cuba’s No. 1 beach resort — will reopen to international tourism beginning Oct. 15, and the tourism ministry launched an advertising campaign under the theme “Breathe”.

In response, Germany’s Condor was the first airline to announce it would fly to Varadero six times a week from German airports beginning Oct. 31, followed by TUI with two weekly flights to Varadero from British airports.

The opening of Varadero and other destinations follows a limited opening to international tourism in the northern keys, which prompted the resumption of flights from Toronto and Montreal.

In July — before actual flights resumed — Cuba opened up for international visitors from any country, without requiring previous lab tests. Visitors only need to show health insurance (or buy it at the airport fo $30), fill out a health information form, and take a free PCR test upon arrival. After a first night under quarantine at their hotel and a negative test result, they are free to enjoy the beach.

Every hotel in Cuba has a doctor, nurse and epidemiologist to monitor the health of tourists and employees. If a tourist tests positive, they will be hospitalized, and those who have arrived with them will be quarantined in a specially designated zone of the hotel. Guests can move around the hotel without masks, while observing a social distance; only hotel staff are required to wear masks.

Private allocations, except in Havana and the two lockdown provinces, are also open for business again, with owners bearing the responsibility of reporting guests with symptoms to the health authorities. More than 2,000 private lodging owners have participated in epidemiological training by local tourism authorities.

Cuba also reopened its marinas — minus Havana — to international boating.

Even after the second wave of contagion, which took longer to ease than the first one, Cuba still stands strong in comparison to most other countries, with just 123 deaths as of  Oct. 8 and less than 6,000 cases of contagion, for a total population of 11 million. Díaz-Canel said during his Mesa Redonda appearance that Cuba is the only country that has traced all contacts of infected persons.

However, the dire situation globally in regards to controlling the disease and Cuba’s success in flattening the second wave justify a reopening the economy now, he suggested, changing the approach set by the Politburo of the Communist Party in July, which divided a first of two stages into three phases before entering a second stage of reopening. He added the change of strategy had been approved by the Politburo a day earlier, under the direction of Raúl Castro.

“Is it logical to continue with our many restrictions?,” Díaz-Canel asked, rhetorically. “Or is it more logical to begin to develop a strategy to coexist with the disease, reviving our economic and social activities?”

The president emphasized the central importance of health, saying the government was planning to “strengthen protocols and treatments, based on our experience, and faith in ourselves”, in order to “aspire a new normalcy in which it is possible to coexist with the disease, while minimizing the risk.”

The reopening will be accompanied by a package of speeded-up reforms. Although they may not produce immediate results for the increasing scarcity of goods and growing lines, together with a restart of tourism they promise longer-term relief.

In an appearance on Mesa Redonda four days later, Economy Minister Alejandro Gil said there were 16 areas of reform that are being worked on simultaneously. Most importantly, he confirmed that the elimination of the convertible peso (CUC) is imminent and reiterated that the Cuban peso will be subject to just one exchange rate versus the US dollar and other currencies. The current system of multiple exchange rates overvalues Cuba’s currencies, creates a disincentive for exports, and obfuscates accounting, he said.

The currency reform will be accompanied by an elimination of “excessive” subsidies to state enterprises, and an adjustment of salaries that is intended to stimulate work, he said.

As the pending currency devaluation is opening up opportunities, the government is putting major efforts into promoting exports. Under a new system that allows private businesses to sell their goods abroad using state enterprises as intermediaries, which then charge 20% of hard-currency revenues, 15 agreements have been signed, Gil said. Beyond that, Gil said that the government is now providing tax breaks for exporters.

In an effort to promote Cuba’s lagging food production, the government now allows private farmers to contract farm hands, and sell their products for hard currency at the Mariel Zone or export them through state intermediaries. The government will also take first steps to create an agricultural bank that will “support the best producers”, using the existing network of the state-owned Banco de Comercio y Crédito; plans call for capitalizing the startup bank with a modest 35 million pesos. Finally, the agriculture ministry has begun to sell farm supplies for hard currency in three provinces; these wholesale outlets will gradually expand to the whole island and eventually sell tractors and other agricultural machinery as well, Gil said.

Most importantly, “the bases are set” for a redesign of the agricultural distribution system — in the works for many years — according to Gil, allowing private actors to engage in retail and wholesale distribution of food. The de facto monopoly by state distributor Acopio — probably the biggest bottleneck in Cuba’s agricultural economy — has been standing in the way of repeated efforts to revive food production; the future role of Acopio in this latest reform effort has not been clarified, but Gil said the entity was “not designed to be a monopolist”. Agricultural planning will be somewhat decentralized, with municipal and provincial governments playing a bigger role in pricing, he said.

State enterprises, which are supposed to be the engines of the Cuban economy but have been held at the short leash of government ministries, will enjoy more autonomy through a package of 15 measures. Among others, they will be subject to a more decentralized system of hard-currency assignation, receive more discretion on distributing profits among employees, and be allowed to create subsidiaries.

The range of private business activities, generally referred to as “self-employed work”, will be determined by a list of prohibitions rather than the existing list of 127 permitted activities, which made businesses subject to wide discretion by government inspectors. The government “is working on” that prohibited list, Gil said, without giving a date. The government will also issue permits for several activities to the same individual. State wholesale chain Mercabal — set up to serve private businesses — is apparently expanding despite the current crisis, with monthly sales rising from 4 million pesos before June to 50 million pesos today.

TTop Stories
Half a year after first floating the idea, the Obama Administration on Friday announced a number of executive…
TTop Stories
As part of an agreement that includes record fines of $8.97 billion to settle allegations it used U.S. dollars in transactions with Cuba, Iran, Sudan and Burma, French bank BNP Paribas promised U.S. enforcers to terminate all business with U.S.-sanctioned countries "in any currency."
TTop Stories
Free-travel proponents and opponents are amid a bruising battle in the U.S. House of Representatives, after a House…