Caribe Metals Corp. is the first foreign mining investor in the Sierra Maestra region in many years
0
Shares
0
0
0
0 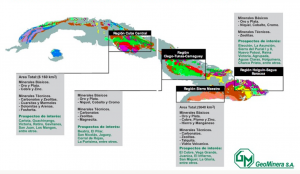 CUBA STANDARD — An Australian startup formed a joint venture to develop a copper mine in Santiago de Cuba province, without disclosing any details.

Caribe Metals Corp. signed an agreement in Havana Sept. 23 with state company Geominera to form the Minera del Sur S.A. joint venture, Cuba’s Ministry of Mining and Energy announced via Twitter. The joint venture will develop “the Mina Grande El Cobre copper/lead/zinc/gold and silver mine in the Province of Santiago de Cuba, SE Cuba to marketable product”, Minera del Sur Vice President Kim Prior said in her LinkedIn account. The initial focus will be on copper concentrate, the mining ministry said in the tweet.

Rather than exploring new areas, the joint venture will likely work on tailings at El Cobre, which has a history of three centuries of mining.

A Caribe Metals official did not respond to questions via email.

Minera del Sur is the first foreign mining venture in eastern Cuba in decades. The Sierra Maestra region has potential for new mining as well, according to Cuban officials. Geominera lists the deposits of Esperanza-El Cobre, Vega Grande-Juanica and Marea del Portillo in the Sierra Maestra area as mining projects with potential for copper.

“Prospects are high for locating precious metals (gold and silver), base metals (copper, lead, zinc), iron and manganese,” Geominera says in Cuba’s latest “Portfolio of Opportunities” about the Sierra Maestra region. “We know of a large number of mineral deposits in this great geological structure.”

Meanwhile, mining opportunities in central Cuba have called the attention of one Canadian company.

In 2018, Toronto-based Millbrook Minerals Inc. — a startup headed by a former Canadian ambassador to Cuba — formed an International Economic Association with Geominera to search for base and precious metals at 13 sites in Camagüey, Ciego de Ávila and Las Tunas provinces. Millbrook said it will invest $20 million in geological risk prospection in the course of five years, at several sites in three central provinces of the island. If successful, the partners will form a joint venture for commercial exploitation. The metals exploration project — dubbed Los Pasos — is the largest of its kind in Cuba in two decades, according to a Geominera official.

Other foreign investors are angling for lower hanging fruit. At least two international players have recently explored or begun work on tailings of historical mines in the island.

In its first full year of production since reopening in late 2017, the Castellanos mine in western Cuba treated 800,000 tons of ore in 2018, generating a profit. The Empresa Minera del Caribe S.A. (Emincar) joint venture, which produces zinc and lead from tailings at the mine in Pinar del Río province that was shuttered in 1997, is 49% owned by Singapore-based commodity giant Trafigura Group Pte.; 51% is controlled by Geominera. As part of the investment, Trafigura has loaned Emincar $297.5 million, according to the company’s annual report; Emincar repaid $12.2 million during 2018. Trafigura’s trading arm is the sole buyer of the mine’s lead and zinc. The capital expenditure and operation is managed by Trafigura Mining Group and overseen by a board of directors representing the joint venture partners.

In 2017, Chile’s RM Aseosorías & Consultorías Ltda. agreed to perform a feasibility study of extracting iron from nickel tailings in Nicaro in eastern Holguín province. An estimated 120 million tons of toxic sludge — called colas negras — from the shuttered Comandante René Ramos Latour processing plant piled up in reservoirs from 1961-2012. Apparently, nothing has come of the study.

As second COVID-19 wave is easing, Cuba speeds up reopening of economy, tourism

CCompanies
The equipment maker is preparing to re-enter the Cuban market as soon as possible, and a top executive suggests other U.S. multinationals start getting ready too
CCompanies
Roger Klüh will attempt to break the speed record for a Florida Strait crossing by boat from Key West to Havana this Saturday
CCompanies
SMS Cuba said its service allows users phone-to-phone, two-way texting with their contacts in Cuba