A consortium of Indian tribes from Canada signed an agreement with the Cuban government to build a $410 million golf course community at Guardalavaca, the New York Times first reported.

The group, Ottawa-based Standing Feather International Inc., signed a memorandum of agreement in April and expects to break ground in September, according to the Times. Standing Feather is partnering with state company Palmares S.A. in the Cuba-Kanata Golf SA joint venture.

The $410 million Loma Linda Golf Estates in eastern Holguín province is among four golf course condominium projects expected to first get approved by the Cuban government.

Due to its location, the project stands out from three competing golf projects closer to Havana and Cuba’s No. 1 beach resort, Varadero (see map). Loma Linda is located in the eastern part of the island, an hour’s drive from Cuba’s third-largest airport, the Frank Pais International Airport in Holguín with nearly 50 international flights per week.  The project, adjacent to an existing beach resort at Guardalavaca, is four miles from the deep-water port and international yachting marina of Puerto de Vita. 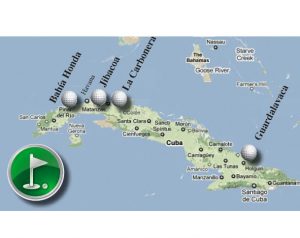 The 520-acre site is anchored by the Loma Linda hill and has direct access to Playa Guardalavaca.  An undisclosed number of luxury villas and apartments aside, the project will be anchored by an 18-hole golf course, commercial center, and a 170-room boutique hotel.

Loma Linda was designed by Graham Cooke & Associates of Montreal.

A British group wants to build a golf resort in Varadero, another Canadian group is planning one in Jibacoa, half-way between Varadero and Havana, and a Spanish group has a golf project at Bahía Honda, west of Havana.

A fifth group, also from Spain, announced it is negotiating construction of what would be the island’s by far largest golf and marina resort on the Guanahacabibes peninsula, the western tip of the island.

Editor’s Note: In a first version of this article, published May 25, we incorrectly stated that the Standing Feather consortium was “led by Mark Entwistle.” Mr. Entwistle, according to Reynolds Dolgin LLP, a law firm representing Standing Feather International Inc., is not related in any way to the project.