In a major endorsement for Cuba’s economic reform project, the man expected to become China’s president in 2013 witnessed the signing of 13 agreements in Havana that include the billion-dollar expansion of a refinery, the extension of fresh loans, and an agreement to set a five-year cooperation plan.

In a meeting with Raúl Castro — the culmination of his two-day visit — Vice President Xi Jinping said that China intends to increase its “practical cooperation.”

Xi lauded the 6th Congress of the Communist Party of Cuba in April, which ratified 300-plus reforms, as a key event that “determined the direction of the future development of the country.”

Agreements include a new line of credit, a restructuring of two existing lines, a donation, and a loan for the modernization of Cuba’s healthcare system, according to a bulletin provided to journalists. No further details were available.

A letter of intent signed Sunday paves the way for a doubling of the Cienfuegos refinery’s capacity from 65,000 to 150,000 barrels per day. According to Reuters, this is a three-way agreement between Cuvenpetrol, the Cuban-Venezuelan joint venture that owns the refinery; China Huanqiu Contracting & Engineering Corp., a subsidiary of state oil company CNPC; and the Italian subsidiary of Technip, a French oil engineering company.

No further details have been published; the Reuters article puts the cost of the expansion at $6 billion. Observers have speculated that Huanqiu might take an equity stake in the refinery in exchange for part of its work.

In a second letter of intent, according to Reuters, Huanqui and Cuvenpetrol agreed on the construction of a regasification plant near the refinery in Cienfuegos. The plant would process liquefied natural gas from Venezuela to be used by power plants in Cuba.

Another letter of intent is about expansion of the Port of Cienfuegos and dredging.

These projects are expected to be financed by China’s Export-Import Bank, using Venezuelan oil as collateral, according to Reuters.

In the meeting with Castro, Xi Jinping was joined by Zhu Zhixin, vice president of the National Commission on Development and Reform, Deputy Trade Minister Zhong Shan, and China Development Bank Vice President Chen Yuan, among others.

China is Cuba’s second-largest trade partner, after Venezuela. Bilateral trade rose from $1.5 billion in 2009 —after a 30-percent drop in the wake of Cuba’s 2008 liquidity crisis — to $1.8 billion last year.

Xi is on a tour of four countries; he was in Italy before arriving in Cuba, and is scheduled to visit Uruguay and Chile after his stop in Havana.

“The deepening of reform in Cuba and the broadening of liberalization measures will call more attention among Chinese companies,” said Wu Hongyin, director of the Latin America Institute of the Chinese Academy of International Relations, on China Radio International. “This, in turn, will increase Chinese-Cuban economic cooperation, and create more opportunities for both nations in important economic sectors such as agriculture, telecommunications, infrastructure, services, energy, among others. Future economic relations will be closer.” 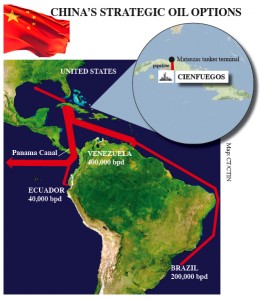 Global Times: A Chinese view of the embargo

TTop Stories
Boosting the number of airports allowed to host Cuba flights from three to a dozen, the Obama Administration…
TTop Stories
Reconfirming Cuba’s close economic ties with China at a time of political change both in Beijing and Havana,…
TTop Stories
Adding Ecuador to the list of countries that are implementing a Cuban-developed distributed energy system, Cuba has started…