After at least two years of ‘false alarms’ from U.S. politicians about Chinese oil rigs in the Gulf of Mexico, Chinese state oil company CNPC on June 5 agreed to contract five blocks in Cuban waters.

Chinese involvement in offshore drilling in Cuba near U.S. waters is a politically sensitive issue in Washington.

CNPC will expand cooperation with CubaPetróleo (Cupet) in “exploring and developing new onshore and offshore oil blocks in Cuba,” CNPC said in a terse press release, without providing any details.

According to observers close to the negotiations, a framework agreement between CNPC and Cuban state oil company CubaPetróleo (Cupet) signed by the CEOs of both oil companies June 5 in Havana, in the presence of Vice President Xi Jinping and Raúl Castro, includes the contracting of blocks N19, N20, N21, N22 and N30 at the western edge of Cuba’s economic exclusive zone, adjacent to the maritime border with Mexico.

China’s blocks are next to four blocks leased by Petrovietnam, and four blocks Angolan state company Sonangol is negotiating.

In addition to new exploration CNPC, under the “expanded cooperative framework agreement,” will provide help in reducing operating costs and raising output and recovery rates at existing on-shore oil fields.

The agreements also include a memorandum of understanding on “cooperation in engineering construction,” according to the press release. CNPC subsidiary China Huanqiu Contracting & Engineering Corp. agreed to be the contractor for the $6 billion expansion of a refinery in Cienfuegos, Reuters reported on Sunday. CNPC’s engineering construction may “help facilitate Cuba’s economic development and social progress,” the CNPC press release said, without providing any details.

The CNPC agreement is part of billions of dollars worth of economic support China agreed to provide during a visit of Vice President Xi Jinping to Havana. Xi is expected to be the next president of China. 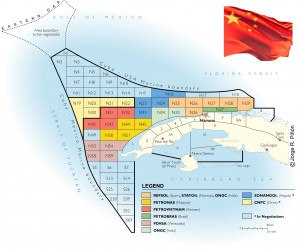 TTop Stories
Following recent announcements by at least three foreign financial players to set up or expand Cuba funds, two…
TTop Stories
By Jorge Piñón As the semi-submersible Scarabeo 9 approaches Cuba to drill five exploratory wells over the next 12…
TTop Stories
CUBA STANDARD — While denying it is moving towards a break in diplomatic relations, the Trump administration ordered…