City of Baracoa bearing the brunt of Matthew

The 40,000 inhabitants of the the eastern-tip city will witness the worst of a slightly weakened Hurricane Matthew in a few hours
0
Shares
0
0
0
0

CUBA STANDARD — The eye of a slightly weakened Hurricane Matthew is currently passing over Baracoa, in the province of Guantánamo at the eastern tip of Cuba.

Even if Baracoa — a city of 40,000 — sustains heavy damage, the country seems to have been only grazed by the bullet, as the Category 4 storm touched just a tiny portion of the island.

Some 35,000 people in the city have been accommodated in 62 shelters and safer buildings, according to official website Cubadebate.

Tourists in the area, including 15 in private bed-and-breakfasts, have all been concentrated in the Hotel Porto Santo. Meanwhile, the hotels El Castillo, Rio Miel, La Rusa and La Habanera have sustained damage, according to local reports.

More than 60 tons of recently harvested cacao and 35 tons of coffee, as well as cattle, have been moved to safer locations. Crop houses and irrigation systems have been dismantled, and a gravity water system in the area has been shut off, for security reasons.

Some 179,000 people have been evacuated from low-lying and other endangered areas throughout the province of Guantánamo.

According to the Cuban meteorological service, at 6 pm EST Matthew made landfall near Punta Caleta, further east than initially forecasted, and at a bigger distance from Guantánamo and Santiago, eastern Cuba’s big cities. The storm, weakened somewhat by the mountains of Haiti, is advancing at 15 km/h and expected to remain over the eastern tip of the island for some three hours, and leave Cuba between midnight and 1 am near Bahía de Mata, sparing the nickel mining center of Moa and the city of Banes on the northeastern coast in the province of Holguín. 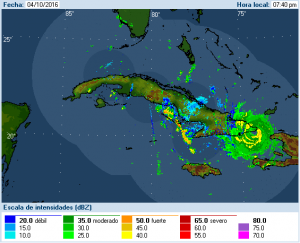 The eye of the hurricane crossed the city of Baracoa at around 11 pm, with heavy damage expected from wind, sea flooding, and heavy rain. Rainfall is forecast to be between 200 and 300 mm, with sustained wind speeds of more than 100 km/h and top speeds of 280 km/h; Radio Baracoa reported sea waves 8m high and uprooted trees.

“The situation is Baracoa is disastrous,” a local TV reporter said by phone around 9 pm. As power was cut off, it is still impossible to estimate the damage.

Twitter users reported that a bridge at Imías collapsed, cutting off that town, which is located halfway between Guantánamo and Baracoa, as well as San Antonio del Sur and Maisí.

At least four people have been killed in the Dominican Republic in a landslide. Little information is available about Haiti, which bore the brunt of the storm; at least five people were killed, some 14,000 displaced, and a major bridge collapse cut off the road to southwestern peninsula of Tiburon.

Raúl Castro toured the preparations for the storm in Santiago de Cuba and Guantánamo. Hurricane Sandy, which was underestimated in its severity during preparations, killed 11 people in eastern Cuba in 2012, an unusually high number of casualties for Cuba.

Book review: How will your company fit into the new Cuba?

EEconomy
By José Manuel Pallí, Esq. If you were to compare the Cuban foreign investment law (CFIL), and I mean…
EEconomy
Foreign minister suggests biotech cooperation
EEconomy
Canada announced it will expand its air transport agreement with the island, allowing for more airlines to operate between the two countries