CUBA STANDARD — As the U.S. and Cuban delegations are sitting down for a third round of negotiations in Washington on the resumption of full diplomatic relations, it is mostly technical issues that remain to be discussed, Cuban diplomats suggest.

In a press conference May 19 in Havana, the Cuban foreign ministry’s Deputy General Director for the United States, Gustavo Machín, said that both sides are coming to the next round of talks with the objective of agreeing on the “when and how” of reestablishing diplomatic relations and opening embassies.

Two of Cuba’s top conditions are about to be fulfilled. The U.S. Department of State will remove Cuba from its list of terror-sponsoring nations effective May 29, and Cuba is about to acquire banking services for its Interests Section in Washington.

The last sticking point in the talks is the U.S. demand for free travel on the island for its diplomats and unfettered access to dissidents. The Cuban government maintains that U.S. diplomats’ past support of domestic opposition figures violates the Vienna Convention on Diplomatic and Consular Relations.

“Several points regarding this issue have yet to be resolved,” Machín said. The United Nations Charter and the Vienna Convention “clearly define the role of embassy staff. Personnel must abide by the host country’s laws and do nothing to undermine internal order.”

A high-ranking State Department official said May 19 in a conversation with reporters that Washington is willing to change the way it works with Cuba’s opposition. U.S. democracy programs “have changed over time, and they will continue to change over time to reflect a reality, whether that reality is on the ground in Cuba or in the United States,” the official said.

Even so, the head of the U.S. delegation suggested to a Senate committee the next day that the issue of freedom of movement for U.S. diplomats has yet to be resolved.

“While progress has been made in our efforts to reestablish diplomatic relations, we are not there yet,” Assistant Secretary of State for Western Hemisphere Affairs Roberta S. Jacobson said during a U.S. Senate hearing a day after Machin’s comments and a day before the talks were scheduled to resume. “There are still outstanding issues that need to be addressed to ensure a future U.S. embassy will be able to function more like other diplomatic missions in Cuba and elsewhere in the world.”

The State Department has asked for $15 million for civil society programs and $5 million for rule of law and human rights programs in Cuba for fiscal year 2016, about the same amount it requested in 2015, U.S. journalist Tracey Eaton reported on his Along the Malecón blog. In addition, it is asking for $528,000 for a new educational and cultural exchange program called “Cuba Outreach Initiative.” The U.S. Interests Section employs two people for public diplomacy activities, according to Eaton, spending $666,000 this fiscal year. The State Department requests $704,000 for public diplomacy in Cuba this year.
In the budget request documents, the State Department says “the United States will continue robust democracy assistance to Cuba to support civil society and greater human rights for the Cuban people.”

If the two sides reach an agreement, observers believe Secretary of State John Kerry could visit Havana in coming weeks to announce the opening of embassies in Havana and Washington.

“We are not in the business of regime change,” Obama said at a press conference in Panama April 11 in response to a reporter’s question. “We are in the business of making sure the Cuban people have freedom, the ability to participate and shape their own destiny and their own lives, and supporting civil society. There’s going to be an evolution, regardless of what we do, inside of Cuba.”

“Partly, it’s going to be generational … Part of my message here is, the Cold War is over.”

He said “persuasion” will be his primary approach, because Cuba doesn’t “implicate our national security in a direct way.”

“We have to be very clear: Cuba is not a threat to the United States,” Obama said. “Very often, when we insert ourselves in ways that go beyond persuasion, it’s counterproductive. It backfires. That’s part of our history, and that’s why other countries are using us as an excuse for their own governance failures. Let’s take away the excuse, and let’s be clear that we’re ready to partner and engage with everybody.”

As in the previous two rounds of talks, the delegations will be led by Jacobson and Josefina Vidal, Director General of the U.S. Division of the Ministry of Foreign Affairs. The Cuban delegation arrived in Washington two days ahead of the talks, scheduled to begin May 21.

“The just decision by President Obama to remove Cuba from the list of terror-sponsoring states, and the progress reached in the steps to resume banking services of the Cuban Interests Section in the United States could create an appropriate bilateral and regional context to advance towards the resumption of diplomatic relations and the opening of embassies,” Machín said in the press conference.

In March, Cuba agreed to separate talks on human rights, and the United States agreed to “future talks” on settling U.S. claims for expropriated properties, Jacobson said May 20 during the Senate hearing on U.S.-Cuba relations.

Machín emphasized the difference between the limited issue of diplomatic relations and the broader process of normalization.

“Normalization is a longer, more complicated process, which implies the total elimination of the blockade; the return of the illegally held naval base in Guantánamo; an end to subversive radio and television broadcasts; the cancellation of U.S. plans to promote regime change; and compensation for the damages caused the Cuban people over half a century of aggression.”

“We are advancing, but it has been 56 years without diplomatic relations, and there are still issues which must be addressed,” Machin said.

“Significant differences remain between our two governments,” Jacobson said during the Senate Hearing a day later. “We continue to raise our concerns regarding democracy, human rights, and freedom of expression. And we will seek to engage with all Cubans to gain their perspectives on the best way forward for the country.”

If the two sides agree on reopening embassies, the Cuban government is expected to nominate José Ramón Cabañas Rodríguez, the sitting chief of the Cuban Interests Section in Washington, as ambassador.

The nomination of the leader at the U.S. embassy in Havana is trickier, due to resistance in Congress.

Getting the nominee voted out of the Senate Foreign Relations Committee will be difficult. The panel includes Sens. Marco Rubio (R.-Fla.), and Robert Menendez (D-N.J.), two members who are furious about the president’s actions and have threatened to hold up any ambassadorial nominee. But even if the nomination is voted out of committee, a full vote by the Senate could be tricky. The nomination could be blocked by any senator if the White House can’t secure at least 60 votes in the 100-member body.

The candidate for U.S. ambassador to Cuba – along with the president’s plans for Cuba – would also face tough grilling in a nomination hearing in the Foreign Relations Committee, something the Obama administration is likely to want to avoid. 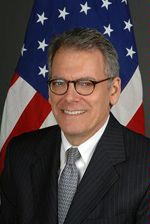 Obama could avoid all this congressional drama by keeping the chief of the Cuban Interest Section, Jeffrey DeLaurentis, as a chargé d’affaires, says Washington attorney Robert Muse, who thinks the U.S. Interests Section in Havana is already fully equipped to normalize relations.

“It has a full complement of foreign service officers who provide a full range of consular services already,” he said.

A chargé d’affaires represents his or her nation in the country they are accredited to and enjoys the same privileges and immunities as a regular ambassador. They usually serve on a temporary basis when the ambassador is away, but some have served for long periods of time.

DeLaurentis is considered a top candidate for the job of U.S. ambassador anyway. A career member of the Senior Foreign Service, DeLaurentis was made chief of mission in August, when secret talks between the United States and Cuba had been ongoing for more than a year.

Although he’s a newcomer to the chief of mission job, DeLaurentis knows Cuba well, having served twice in Havana before, first as consular officer in 1991-93, then as Political-Economic Section Chief from 1999-2002.

DeLaurentis has also been the head of the State Department’s Bureau of Western Hemisphere Affairs and served in U.S. mission to the United Nations.

Already, the State Department has asked for more than $6 million to convert the U.S. Interests Section in Havana to an embassy and handle bigger visitor flows, U.S. journalist Tracey Eaton reported on his Along the Malecón blog.  —Ana Radelat and Johannes Werner
0 Shares:
Share 0
Tweet 0
Pin it 0