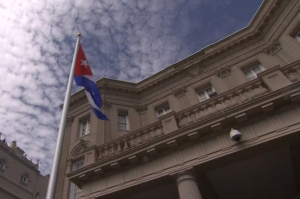 CUBA STANDARD — The Cuban foreign minister is accompanied by a large, high-profile delegation today in Washington to raise the flag of Cuba and celebrate the opening of his country’s embassy in Washington.

Rodríguez is also scheduled to visit with Secretary of State John Kerry.

PPolitics
Sarah Stephens: 43 days in, and the Trump administration has made no changes to the Cuba policy
PPolitics
By Vito Echevarría The number of Helms-Burton lawsuits filed since April 2019, when President Donald Trump lifted the…
PPolitics
CUBA STANDARD — The Center for Democracy in the Americas (CDA) appointed a new executive director. María José…