Foreign companies will perform at least five exploratory drills in Cuban waters between this summer and 2013, a Cuban official announced during an international conference in Havana, without identifying the companies.

Manuel Marrero Faz, a consultant and principal oil expert at the Ministry of Basic Industries, said during the Geociencias 2011 conference Tuesday that the drills will be in water depths between 400 meters (0.25 miles) and 1,500 meters (1.6 miles).

“We are all hopeful, without silly or false hopes, that there exist probabilities to find big oil and gas reserves,” Marrero said, after explaining that in recent years foreign oil companies have identified “more than 20 prospects” for commercially viable finds offshore.

He added that 37 blocks were still available in Cuba’s exclusive economic zone, “no matter where the foreign companies are from, as long as they respect the sovereignty of our country and the laws.”

Six companies and consortia have contracted 22 blocks so far.

One company, Petrobras, quietly let the rights to its only block in Cuban waters lapse last fall, even though they discovered “prospects,” according to Marrero. The relatively small prospect by the Brazilian state company, which is racing to develop major offshore finds off the Atlantic coast of Brazil, “cannot compete” with the hundreds of other prospects they must develop, he said.

The Italian-owned Scarabeo 9 platform is expected to arrive in the Gulf of Mexico this summer, another Cuban official said Monday at the same conference. “Everybody is anxious,” Rafael Tenreyro told reporters during Geociencias 2011, without giving a date. “99 percent of the platforms are late. It’s normal, it’s not extraordinary.”

The first company that contracted the platform is a consortium led by Spain’s Repsol YPF, which expects the platform to arrive in late summer, according to Reuters. Cuba wanted Repsol to commit to drilling two wells, but Repsol limited its risk by agreeing to do one well for sure, a Repsol official told Reuters. After Repsol, a consortium consisting of Malaysia’s Petronas and Russia’s Gazprom, and India’s ONGC Videsh and Venezuela’s PdVSA are next in line. 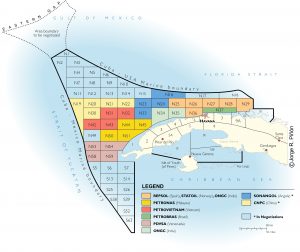