CUBA STANDARD — The chief of the Cuban Interests Section in Washington, currently on a high-profile two-day tour of Florida, provided a first official Cuban response to the Obama administration’s allowing ferry operations between the two countries.

“When I talk to people from Miami, some think this is a next-day thing,” José Cabañas said at a legal conference at the University of Florida in Gainesville. “This will take time,” he said, asked by Cuba Standard.

The enforcement arm of U.S. sanctions, the Office of Foreign Assets Control (OFAC), last week granted licenses to at least six companies in Florida for the operation of ferries. At least two of them have said they could establish ferry service in a matter of weeks.

One would-be operator, CubaKat, which has applied, but not yet received an OFAC license, has even begun selling vouchers for discounted tickets to Havana to raise $500,000 for the purchase of a second ship and establishing operations.

“This is a change in the right direction,” he said about the Obama Administration’ step. “You have to have a process in which the industry will move, and we will consider their proposals as we will consider any other proposal.” 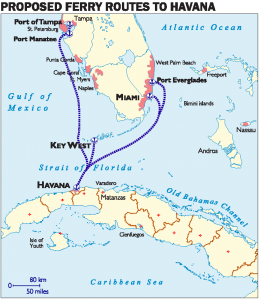 “He very eloquently pointed out the process that must be followed before any passenger ferry will dock in Havana,” Fernández told Cuba Standard after Cabañas’ remarks. “But he was also very positive about this historic news that further demonstrates the positive spirit of cooperation and engagement. He summed it up very well by saying that this is a step in the right direction.”

Havana Ferry Partners is proposing ferry links to Havana from Port Manatee near Tampa and Port Everglades in Fort Lauderdale.

Cabañas also pointed out that the licenses speak about “commercial vessels for passengers,” not just ferries.

“There are a lot of things that could be done,” Cabañas said, in an apparent hint to the cruise industry and the fact that ferry operators are allowed to carry unaccompanied cargo back and forth.

Cabañas is scheduled to tour Port Manatee tomorrow, the proposed base for at least two of the ferry operators.

He will also speak at New College of Florida as an invitee of the Sarasota World Affairs Council May 12.

At the 16th Annual Conference on Legal and Policy Issues in the Americas in Gainesville, he sat on the podium and in the audience next to John Caulfield, a former chief of mission of the U.S. Interests Section in Havana, who has also assisted behind the scenes in the normalization talks.

“It’s like waking up from a long dream,” said Steven Zack, a Miami-based attorney with Boies, Schuller & Flexner, who has followed Cuba for many years, about the diplomats’ side-by-side appearance.

The legal conference, attended by some 60 participants, including many lawyers and at least one federal judge, focused on the new space for business opening up in the new, more permissive environment, since the Dec. 17 announcement by Barack Obama and Raúl Castro that the United States and Cuba are seeking to normalize relations.

“The rounds (of talks) we have had are going in the right direction,” Cabanãs said about the normalization process. “For the first time ever, we sat as equals at one table. It didn’t happen before or after the Revolution.”

“But there are huge obstacles we still have to remove,” he added. He pointed out the lack of direct banking services, and the U.S. crackdown against the use of the U.S. dollar in transactions with Cuba.

“We don’t have a Bible how this could be dismantled. We have to discover this on a day-to-day basis.”

“Justice has prevailed,” he said about the removal of Cuba from the U.S. list of terror-sponsoring nations, which is expected to be effective May 29.