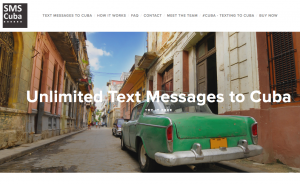 CUBA STANDARD — A Fort Lauderdale-based startup company announced it is offering text messaging service between the United States and Cuba.

Under its new Cuba policy, the Obama Administration is encouraging telecom services to Cuba and Cubans. Text messaging has become a way of life for the nearly 2.5 million Cubans with cell phones who cannot afford expensive calls.

According to SMS Cuba, no text message service was available between the United States and Cuba from any U.S.-based wireless carrier. U.S.-based Skype users have been able to send text messages to Cuban cell phones.

SMS Cuba offers monthly plans ranging from $2.95 for one contact and up to 30 texts to $9.95 for five contacts and unlimited messages. Skype charges 9.7 cents per text; if a customer sends more than 50 texts a month, SMS Cuba’s unlimited plans will be cheaper, says Jennifer Leach, co-founder of SMS Cuba.

“I have been a student of the Cuban telecom environment for the past 20 years,” SMS Cuba founder and CEO Frank S. Caruso said in a press release. “I have been working on practical solutions that are easily deployable for everyday use, knowing that when the time arrived, both U.S. and Cuban businesses and individuals would get great value from the use of these services. SMS Cuba is the first of these solutions.”

A serial entrepreneur in the telecom industry, Caruso has founded a half-dozen companies, including USA Datanet, a VoIP and Internet Service Provider.

CCompanies
CUBA STANDARD — One-and-half years after its originally planned opening, Grupo Iberostar will launch a new beachfront resort…
CCompanies
Authorities cite environmental and safety concerns, as well as the lack of a track record for the startup company. The owners will launch production in Alabama instead
CCompanies
CUBA STANDARD — A small British cruise line was first to announce it picked Havana as home port…