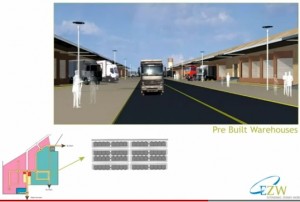 CUBA STANDARD — In what the government hopes will become another leg for foreign investment on the island, the Council of State approved a law-decree that creates a Special Development Zone at the port of Mariel around a new container hub slated to open early next year.

The decree sets up the Oficina de la Zona Especial de Desarrollo Mariel, a one-stop government office that is expected to “efficiently” handle applications by businesses wanting to locate at Mariel. The Oficina will report directly to the Council of Ministers.

The ambitious Mariel Special Development Zone (ZEDM) is a project for the “present and future of Cuba,” Raúl Castro said at a Council of State meeting Thursday, according to official daily Granma.

The government’s targets are broad. The ZEDM aims to attract companies interested in hiring Cuba’s educated workforce to provide goods and services, both for the Cuban market and re-export to the region, by “stimulating foreign and domestic investment, technological innovation, and industrial clustering,” officials said at the State Council meeting, according to the official newspaper. In order to attract high technology and foreign investment, and trigger import substitution and job creation, the ZEDM offers companies incentives that have not, or rarely, been available in Cuba.

To come up with the concept, the government studied similar models abroad and “adopted them to our context,” the Granma article said. Notably, Cuban officials have visited special trade zones in China and Vietnam. The Mariel Zone is both a pilot project and the by far largest of a planned series of Special Development Zones that will also cover foreign-funded golf course luxury developments.

For one, the Mariel law, effective Nov. 1 and published in the Gaceta Oficial Sept. 23, allows for 100-percent foreign ownership. That is a departure from the standard joint venture agreement since the 1990s, which typically reserves 51 percent ownership to the Cuban state partner.

The ZEDM regulations also allow foreign companies to import and re-export goods with little red tape and duty-free. Companies at Mariel are exempt from labor taxes and customs duties, and get a one-year tax holiday on sales and service taxes, as well as a 10-year reprieve for taxes on profits. After that, profits will be taxed at 12 percent.

However, foreign companies will not be allowed to hire Cuban employees directly; as has been customary since the 1990s, they will have to go through a government agency that will receive hard-currency payments and compensate Cuban workers with only a fraction in non-convertible pesos.

The ZEDM also offers reduced bureaucracy. Instead of having to apply with several ministries, companies interested in opening shop will have to deal just with the Oficina. A committee made up of officials from several ministries will evaluate every application and make a recommendation to the Council of Ministers or the general director of the Oficina. Depending on the scope of the proposed project, the general director or the Council of Ministers will have the final say; a decision must be taken within 30 days of receiving an application from the committee.

The prospects for the Mariel Zone are hampered by the U.S. embargo for now, leaving the world’s largest market next door off-limits and imposing costly restrictions on shippers.

Whether these incentives are attractive enough to lure foreign investors remains to be seen. At this point, at least two Brazilian manufacturers have expressed interest in opening shop at the Mariel zone. The first company that has committed to operate there is São Paulo-based Fanavid S.A. The glassmaker will open a manufacturing facility to supply Cuba, Brazil and the Caribbean region with architectural glass, a foreign ministry spokesman in Brazil said last year. Also, Brazilian bus maker Marcopolo has expressed interest in using the ZEDM for an assembly operation, Cuba’s trade attaché in Panama said in August.

The Brazilian government last year offered Cuba help with setting up the legal framework for the Mariel Zone.

“We have a lot of interest in cooperating in the definition of this model, in order to bring in the biggest possible number of Brazilian companies,” Brazil’s Foreign Trade Minister Fernando Pimentel said during a tour of Mariel last year.

Cuba is directly appealing to Chinese companies as well. Foreign Investment Minister Rodrigo Malmierca is in China this week, where he heads a workshop on the Mariel Zone, after meeting with “many company and banking executives,” according to Prensa Latina. Malmierca said the Mariel project “has aroused great interest” in China.

At the core of the Mariel Zone is a $900 million container terminal that is currently being built by Brazil’s Grupo Odebrecht SA, with mostly Brazilian funding. The first phase of the container terminal is slated to begin operations in January 2014. Once completed, the Mariel container terminal will replace the Port of Havana as Cuba’s main port of entry for goods, placing the island at the forefront of shipping hubs trying to benefit from the Panama Canal widening, which is slated for completion in 2015.

A railroad connecting Mariel to Havana is currently under construction, as part of the port project.

The Mariel Zone, covering 180 square miles within the limits of several municipalities in Artemisa Province just west of Havana, will eventually add port terminals, logistics facilities, distribution and warehouse facilities, as well as industrial and service parks, according to Granma. Details for construction of a first industrial and service zone will be firmed up after the opening of the first phase of the container terminal in January, the newspaper said.

To accommodate businesses at Mariel, construction of water and electric infrastructure, conference facilities, retail centers, as well as workforce housing and recreational facilities will be necessary, the article said. No further details have been released.

The article didn’t mention an offshore oil logistics complex, which had been previously included in official discourse about the Mariel Zone. The plans are probably on hiatus as most foreign oil companies have shelved offshore exploration, for now. Without giving a specific date, Zarubezhneft has said it will resume near-shore drilling in 2014; the Russian company abandoned a well off north-central Cuba in May. However, no deep-sea drilling is planned for the coming years after a  platform custom-designed for Cuban waters failed to strike oil this year.

TTop Stories
CUBA STANDARD — As a second wave of contagion is beginning to flatten, but before reaching the benchmarks set by a…
TTop Stories
By Jorge Piñón As the semi-submersible Scarabeo 9 approaches Cuba to drill five exploratory wells over the next 12…
TTop Stories
In a flashback to the violent 1970s and 80s in Miami, state and federal investigators — including FBI…