According to official statistics, 27.1% of all Cubans — or 3.05 million people — had access to the Internet in 2014. Considering the access growth rate over the past few years, by mid-2016, roughly every third Cuban should be connected to the web.
0
Shares
0
0
0
0 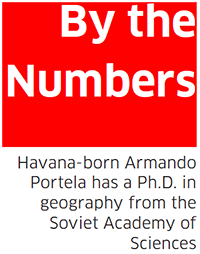 “The Internet in Cuba is trapped in the 1990s”, said Google Chairman Eric Schmidt in a statement during his visit to Cuba in March. It lags indeed when compared to world standards or even to Latin American sub-standards.

According to the latest Oficina Nacional de Estadísticas yearbook, 27.1% of all Cubans — or 3.05 million people — had access to the Internet in 2014. Considering the access growth rate over the past few years, by mid-2016, roughly every third Cuban should be connected to the web.

ONE considers a connected person anyone working or studying in a place with Internet connection and having clearance to surf, even if that person seldom can do it. The ONE figure also includes people with access only to the intranet, the government-controlled version of the World Wide Web.

The number of those who can connect at home or work at will and for as long as they need is likely much lower than 3 million. One estimate that looks more truthful put it just under 600,000 people, more than half of them concentrated in Havana.

Compared to Latin America, Cuba’s Internet service is one of the worst, particularly in view of the higher education levels of the island. 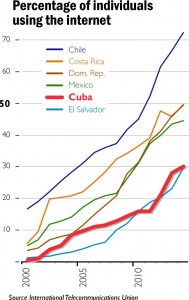 Combining the International Telecommunications Union (ITU) data for Internet access per country (ITU uses only official figures for Cuba) with population figures, Cuba ranks 15th out of 20 in the percentage of people having access to the Internet, well behind most countries in the area, including Panama (45% accessibility), Dominican Republic (49%), Costa Rica (49%), Mexico (44%) and Chile (72%), which leads the Latin American pack. Behind Cuba come El Salvador (23%), Guatemala, Honduras, Nicaragua and Haiti, all of them with less than 20%.

According to the ITU, there were 4,984 fixed-broadband subscribers in 2013, ranking Cuba 163th in the world.

Slow speed is a big concern. Cuban surfers find it a nightmare to download a 1 mb picture or a song. A 5 mb file (the full size of a Cuba Standard Monthly issue) must be left to download overnight while hoping for no streaming interruptions. A connection speed of 1 mbps is exceptional; most run under 56 kbps, which makes any attempt to search the Web or share information almost impossible.

Akamai Technologies, a content network and cloud services provider based in Cambridge, Mass., ranks 55 countries by Internet speed. The Akamai ranking includes 13 Latin American countries headed by Uruguay with 5.5 Mbps. The speed for countries at the bottom of the list is 1.5 Mbps. Cuba is not included.

Up until recently, Internet access in Cuba was not a personal choice but a government appointment. Access was granted to officials, physicians and some other active scholars, mass media companies, college students in their classrooms, foreign businesspeople (including their Cuban employees or counterparts) and diplomats. For a price that equals the average state salary for a week, any person can buy by-the-hour access cards to surf the Web at hotels or Internet cafes. Very few can afford the luxury.

However, some people with Web access discretely “share” their service with other people — many of them foreign residents of Cuba — for about $20-$30 per month..

Beginning last year, Cuba opened dozens of WiFi hubs in major cities. Access cards are sold at $2.50 an hour, or two days’ salary for many, and users employ their time to engage in chats with their relatives abroad, often using voice and image apps, rather than surfing the Web with their mobile gadgets.

But in Cuba small business sprouts everywhere there is a need. A swarm of access cards resellers around the Wi-fi hubs charge $3.75/hour, thus sparing the need to wait in line for a card. A set of earphones and microphone on the spontaneous IT market go for $3.75 per piece.

“Access to the Internet can bring better education, better business, and a more open, accountable government to Cuba,” Schmidt said in his statement. “Our visit confirmed that the government recognizes some of the benefits of increasing access for Cubans, but it has not gone far enough in implementing the policy reforms needed to open the country to the web.”

In Cuba, Internet development is trapped by low penetration, stumpy speed, high cost and usage restrictions. The evolution is sluggish, but the high demand by a well-educated population and the momentum of reforms will make the changes inevitable.

DData & Maps
By Armando Portela Cuba ranked No. 70 in 2020, down from 68 in 2016, among 188 countries in…
DData & Maps
Cuba’s estimated 10,697 Km (6,647 miles) of paved roads reach practically every corner of the island. Just a…
DData & Maps
If the number of U.S. visitors to Havana booms as expected, Cuban authorities will have to find a solution to relieve the bottleneck at Terminal 2 of José Martí International Airport. With neither cash nor time for a major upgrade, the top option would be to divert part of the U.S. flights to other, already crowded, terminals. But there's another alternative, at least temporarily.