CUBA STANDARD — In what looks like moves 180 degrees opposed to the Trump administration’s new tough-on-Cuba policy, John Deere & Co. and a distributor of competitor Caterpillar Inc. secured groundbreaking deals with Cuba — and were apparently accommodated by the U.S. government.

John Deere Vice President Charles Stamp signed an agreement with state entity Maquimport at the Havana Fair Nov. 2 to supply hundreds of farm tractors and implements to Cuba, making it the first direct sale of U.S. machines to Cuba in more than half a century.

Stamp said that the negotiations took a year, and that Deere has licenses from the U.S. Department of Commerce, according to official daily Juventud Rebelde.

Stamp signed the agreement a day after Rimco, the Caterpillar dealer in Puerto Rico and the eastern Caribbean, announced it will open a distribution center at the Mariel Special Development Zone, becoming the first U.S. company to have a physical presence in the high-profile industrial project.

Both companies seem to be racing to establish a foothold in Cuba before the Trump administration slams the door.

The sale of farm tractors and implements to the Cuban agriculture sector will “improve food security for the Cuban people” and benefit small farmers and member-owned co-ops, said Deere & Co. spokesman Ken Golden.

“Deere believes that improvements in the Cuban agricultural sector would improve the availability and affordability of food for the general population,” Golden said. “The dairy, row crop and fruit and vegetable are sectors of specific emphasis.”

A first shipment of Deere tractors is scheduled to arrive in Cuba in mid-November.

“This equipment is for testing and appraisal to ensure it will work with specific Cuban agricultural conditions and farming practices,” Golden said.

The plan calls for shipments of “several hundred tractors and associated implements” over a four-year period, Golden said. The vast majority of the tractors to be sold will be of the company’s U.S.-made 5000 series, between 75 and 115 horsepower; a small number of 7000-series tractors could also be part of the sale.

The Deere and Caterpillar announcements energized pro-nomalization actors in the U.S. Congress.

“My two visits to Cuba have shown me firsthand how our farmers and manufacturers will directly benefit from new trade partnerships and a better relationship with the country,” Rep. Cheri Bustos (D-Il.) said in a press release after Deere signed the deal. “We still have work to do to establish credit and financing on U.S. food sales to Cuba, but I am pleased to hear the news that our effort to open this market and promote Illinois businesses is advancing to grow our local economy and directly benefit hardworking local families.”

John Deere Finance, the company’s in-house entity, is arranging “an appropriate credit facility” with the importer that will be guaranteed by its Cuban bank, according to Golden.

A document published a few days later by the U.S. sanctions-enforcing Office of Foreign Assets Controls (OFAC) seems to specifically address details of the Deere financing deal. In an FAQ document, OFAC confirms that companies can import spare parts and provide financing.

Asked if Deere or Maquimport have to monitor the use of the equipment — such as to ensure that no produce ends up in the tourism sector or as exports — Golden only said that “both John Deere and its Cuban partners have an explicit shared contractual obligation to operate according to both the letter and the spirit of the U.S. export licenses.”

While the tractor deal sets a precedent, it doesn’t open the floodgates just yet. Further sales will be decided by U.S. sanctions bureaucrats on a case-by-case basis, suggests Washington lawyer Robert Muse.

The legal framework for the tractor sales is “a bit complicated”, Muse explains. Under U.S. Department of Commerce regulations loosened under the Obama administration, U.S. companies may export machinery — no license required — if they are used by “entrepreneurs” and other private citizens or entities, Muse says.

But if a state entity is the importer of record — such as Maquimport, in the John Deere case, a Commerce Department license is required. If Deere says the machines, for example, benefit the Cuban people or protect the Cuban environment, “a general policy of license approval exists”, according to Muse.

“On a case-by-case basis, equipment may be licensed for export to a Cuban governmental entity to be used in connection with projects that benefit the Cuban people,” Muse said. 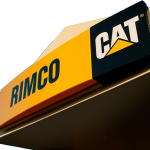 Rimco is the first U.S. company Cuban authorities have allowed to open shop at Mariel.

“We are going to set up a warehouse and distribution center at Mariel, and we will be distributing Caterpillar equipment,” Rimco Vice President Caroline McConnie said during an investor forum at the Havana Fair, according to Reuters. “We have a license from the commerce department and other agencies.”

Rimco officials did not respond to inquiries by Cuba Standard.

Rimco’s Mariel location will provide sales, rental, maintenance and repairs of Caterpillar and AGCO agricultural equipment as well as other brands, according to the Mariel Zone website.

Last year, Caterpillar Inc. appointed Rimco, founded in 1981 by the McConnie family, as its dealer for Cuba.

Current U.S. regulations allow U.S. companies to open offices in Cuba, but U.S.-made equipment, are allowed very limited access to the Cuban market. While farm equipment has recently been sold to Cuba under a final-use provision by private entrepreneurs, other machinery, such as mining equipment, power systems, marine and industrial engines, cannot be sold in Cuba.

Rimco will be able to sell Cat products in Cuba “upon easing of trade restrictions”, a 2016 Caterpillar press release said, in announcing the Cuba appointment of Rimco.

Rimco apparently barely beat a deadline set by the Trump administration, which prohibited dealings with Cuban armed forces-controlled entities as of Nov. 9. The Mariel Zone is controlled by Almacenes Universales, which belongs to the Armed Forces Business Enterprises Group (GAESA). Both companies appear on the State Department’s no-go list (see page 9), but the U.S. sanctions-enforcing agency OFAC recently clarified that any agreements signed before Nov. 9 will be grandfathered in.

Rejection for a startup

The John Deere and Caterpillar deals come after Cuban authorities rejected the application of an Alabama-based startup company to assemble tractors at Mariel.

“They said we did not meet requirements for operator safety, that the tractors could be dangerous, and that the manufacturing process did not sufficiently observe environmental protections,” said Cleber partner Saul Berenthal. Cleber’s small tractors are based on a 1940s design.

“We’re a startup without a record, and that was not the kind of a business they were looking for at Mariel,” he told Cuba Standard.

However, observers believe Cuban authorities — after first encouraging the Cleber application — nixed the deal because Berenthal is a Cuban citizen, and as such not eligible to engage Cuba under its foreign investment law.

Cleber instead is starting tractor assembly at an existing factory in Alabama, aiming to sell domestically and develop a distribution network in Peru, Mexico, Angola and elsewhere.

“We will look to exporting to Cuba when approved,” Berenthal said.

Cleber aims to work with authorities to meet requirements for sales on the island and to start a factory there later.

“We’re going to follow their advice and work with the government agencies to try to bring the tractors to the people who need them. Cuban farmers keep telling us that they want them,” said Berenthal, who was born in Havana. “It is a question of going through the process.”

—Doreen Hemlock contributed to this article

Foreign investment minister: Cuba has $2bln in commitments this year

TTop Stories
At least one Cuban official will participate in an oil safety conference sponsored by the Houston-based International Association…
TTop Stories
CUBA STANDARD — In what the government hopes will become another leg for foreign investment on the island,…
TTop Stories
After at least two years of ‘false alarms’ from U.S. politicians about Chinese oil rigs in the Gulf…