Adding Ecuador to the list of countries that are implementing a Cuban-developed distributed energy system, Cuba has started deploying fuel-oil generators worth several hundred million dollars in the ALBA partner country.

According to foreign suppliers, the project consists of a first phase for deployment of 160 mw in fuel-oil generators; the deployment of 40 mw is already underway. A second phase would add another 190 mw.

The program, originally designed for 150 mw, is funded by the Ecuadorean government; the total cost is undisclosed.

An agreement signed in 2009 stipulated that Cuba would provide containerized generators it had already bought from Korea’s Hyundai Heavy Industries. Germany’s MAN B&W has secured contracts for an undisclosed number of new generators to the Ecuadorean program. Other suppliers that have sold generators to Cuba in the past include Germany’s MTU Friedrichshafen and Spain’s Guascor SA.

While the hardware is supplied by foreign companies, deployment and maintenance is in the hands of Cuban state company Unión Eléctrica (UNE). Corporación Eléctrica de Ecuador S.A. (CELEC) is coordinating the program. 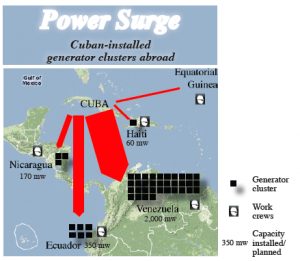 Faced with an electricity crisis caused by aging thermoelectric plants, an obsolete grid and hurricane damages, Cuba in 2006 decided to decentralize part of its electric system by deploying hundreds of diesel and fuel-oil generators that run 24 hours a day, and thousands of backup generators that kick in during peak hours or emergencies.

The decentralized approach — which is part of a larger program dubbed “Energy Revolution” — helped Cuba eliminate extended blackouts in a matter of months, at a relatively low cost, and made the system more resilient to hurricane damage.

In 2008, Cuba began exporting the system, and has since completed minor programs in Nicaragua and Haiti. The biggest program, in Venezuela, for 2,000 mw at a cost of billions of dollars, is still underway.

Ecuador and Cuba signed a memorandum of understanding on energy cooperation in 2009.  The distributed energy project aside, Cuba will contribute biogas and biomass technology, and operate a program to help Ecuadorean households substitute kerosene stoves with electric stoves. In return, Ecuador will provide hydroelectric know-how to Cuba.

TTop Stories
A consortium of Indian tribes from Canada signed an agreement with the Cuban government to build a $410…
TTop Stories
As it lost a last-instance appeal after a decade-long battle in U.S. courts to keep the Havana Club…
TTop Stories
CUBA STANDARD — Signaling light at the end of the economic tunnel, the Tourism Ministry announced that the…