At the sidelines of the UN General Assembly in New York, the presidents talked about additional steps to deepen bilateral cooperation
0
Shares
0
0
0
0 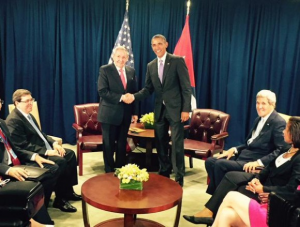 CUBA STANDARD — Raúl Castro and Barack Obama met on the sidelines of the UN General Assembly plenary in New York Sept. 29 to discuss “recent advances in relations between the United States and Cuba,” the White House said in a readout.

In their second behind-closed-doors meeting in less than half a year, the presidents also talked about “additional steps each government can take to deepen bilateral cooperation.” No further information was immediately available about these steps.

The U.S. president, according to the White House statement, highlighted recent embargo-easing steps taken by his administration, allowing “more Americans to travel to and do business with Cuba.”  Obama is sending Secretary of Commerce Penny Pritzker to Havana Oct. 6 and 7, where she will update Cuban officials on the new regulations and gauge business opportunities for U.S. companies.

“The President welcomed the progress made in establishing diplomatic relations, and underscored that continued reforms in Cuba would increase the impact of U.S. regulatory changes,” the statement said.

Castro reiterated the need to lift the embargo and return the Guantánamo naval base to Cuba, Foreign Minister Bruno Rodríguez said during a press conference after the meeting.

In a speech to a cheering UN General Assembly a day earlier, Obama predicted that the U.S. Congress will lift the embargo.

“As these contacts yield progress, I am confident that our Congress will inevitably lift an embargo that should not be in place anymore,” he said. “Change won’t come overnight to Cuba, but I am confident that openness, not coercion will support the reforms and better the life the Cuban people deserve.”

PPolitics
As red-hot U.S. travel to Cuba cooled to orange level in the last months of 2017, 30-plus U.S. travel executives gather in Havana to get the message across that travel continues to be legal and safe
PPolitics
The blacklisting of AIS makes sending money to Cuba even more difficult and tenuous
PPolitics
By Domingo Amuchastegui Cuban exile groups in Miami, together with figures of the “paid opposition” on the island…