CUBA STANDARD — Close to eight weeks since the first reported cases in Cuba, official numbers suggest that the curve of new COVID-19 infections is flattening, with zero new cases predicted for late this month.

Officials — all the way up to the president — are cautious not to appear triumphant, urge Cubans to remain locked down and vigilant, and pillory violations of discipline.

During a special session of the Council of Ministers May 8, the government provided first hints on how it plans to re-open the economy. Economy Minister Alejandro Gil Fernández said that a first “immediate recovery stage” of “gradual return to normalcy” could begin “in the coming months”.

“This process will not happen overnight,” Gil said, adding that this stage consists of “three phases of gradual opening of services and activities in the island, guaranteeing physical distancing between persons and other measures to keep the disease under control.”

He did not say when the bans on international flights and passenger ships might be lifted.

Tourism will not open up very soon, believes one foreign travel entrepreneur who talked on condition of anonymity.

“Cuba is not going to open itself to tourism prematurely. The country will take the most conservative possible approach, regardless of much-needed tourist dollars.”

If the official COVID-19 numbers reflect reality and the new-infection forecast materializes, Cuba’s performance — with 1,741 confirmed cases and 74 deaths as of May 8 — would be nothing short of stellar. Nearby Florida, with a population twice that of Cuba and a similar geographical size, is approaching 39,000 confirmed cases and 1,600 deaths.

To be sure, Cuba is lagging in testing, with so far just over 50,000 administered COVID-19 tests, compared to an estimated 400,000 in Florida. Also, on May 6 the Miami Herald published a story suggesting a considerable undercount of COVID-19 cases in Cuba. Citing statistics from the Pedro Kouri Tropical Medicine Institute in Havana, the Herald said the country was experiencing an unusual spike of 491,494 new cases of “acute respiratory diseases” from March 15 to April 4 that may have included people with COVID-19 who were not counted as such. However, the spike may also be due to intensified health observation implemented by Cuba as the pandemic was spreading around the globe.

Cuban officials did not respond to the Herald story. 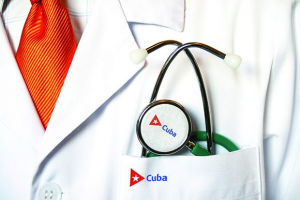 As if to underline the importance of possible undercounts, the day after it published the optimistic forecast graphic, MINSAP reported the single largest day-to-day increase of new cases yet, almost all due to an outbreak at one shelter in Havana for homeless people.

“The forecasts have to be adjusted … and we have to wait longer for the disease to peak,” President Miguel Díaz-Canel said a day later. “This serves us as a lesson, because we cannot trust in the moments when we had turning points towards the better in the pandemic.”

However, since the one-day peak on May 3, the numbers of daily reported cases has been declining, which would keep Cuba on track for and end of the pandemic at the end of this month.