Offshore platform begins what could be its last Cuba job

In what is likely the last assignment for the Scarabeo 9 drilling platform in Cuba before moving on to Brazilian waters, Venezuelan oil company PdVSA began exploring for oil in a block off Cuba.

The Venezuelan energy minister confirmed at an event in Lechería, Venezuela, that the state company has begun exploration drilling at the Cabo de San Antonio 1 field off the western tip of Cuba.

“It has already begun, and when we have the results, we will inform the country,” Ramírez answered reporters’ questions, according to EFE, without providing any details about the progress.

A previous Scarabeo 9 drill for a consortium led by Malaysian state oil company Petronas in a nearby block came up dry in late July. Even though the platform detected oil in great depth that “could extend to other zones” in the four blocks leased by Petronas, Petronas will first study data collected during the drilling and conduct more seismic studies before proceeding to more exploratory drilling, Cuban state oil company CubaPetróleo said in August.

Therefore, the PdVSA drill is Cuba’s best and last mid-term shot to tap into 20 billion barrels of deep-sea oil reserves Cuban geologists believe are resting under the sea floor in national waters. Hampered by U.S. sanctions and dependent on Venezuelan oil supplies, a major offshore find would free scarce resources in Cuba for other purposes and likely turn the country into an oil exporter. Scarabeo 9, owned by a subsidiary of Italian oil company ENI S.p.A. and custom-built in China and Singapore to minimize U.S. content, is the only ultra-deep water drilling rig suited for use in Cuba.

The rig is contracted by Spanish oil company Repsol to be in Cuba until July 2013; however, Repsol officials have hinted they might contract the platform for drills off the Brazilian coast, moving it out of Cuban waters before the July deadline, if no other oil company requests it.

Petrovietnam, which has leased three blocks off western Cuba, said it would wait for the results of the nearby drills before taking a decision on drilling. Indian oil company ONGC Videsh is still looking for partners in its two blocks to share the high cost of ultra deep water drilling.

Meanwhile, Russian oil company Zarubezhneft chartered a Norwegian shallow-water platform for several drills over a period of almost one year. The semi-submersible Songa Mercur, owned by Oslo-based Songa Offshore AS, is scheduled to leave Malaysia July 1, and will then be on standby in Trinidad until Zarubezhneft begins its drilling campaign in late November. 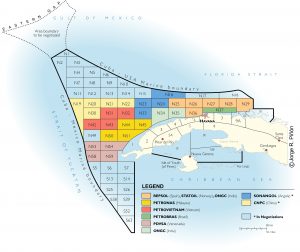 Nick Miroff: Despite reforms, wealth is still frowned upon