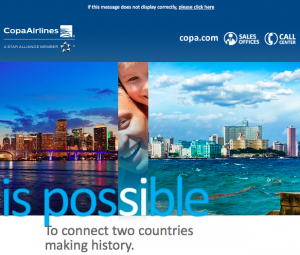 Copa airfares, via Panama, are above most nonstop U.S.-Cuba flights. They start at $694 for Miami-Panama-Havana, $696 from Fort Lauderdale, $715 from Tampa, and $813 from New York. But the airline’s pricing is competitive for U.S. markets without nonstop flights, such as Chicago, Las Vegas, Los Angeles, Boston, New Orleans, San Juan or Washington.

Opinion: On brawling in Panama and polling in Cuba

CCompanies
The Department of Commerce's Bureau of Industry and Security (BIS) has scheduled a monthly call-in program
CCompanies
Maersk dominates Cuba's shipping routes to Asia, but it is hungry for more
CCompanies
The only project that might be affected by the freezing of funds by the Brazilian development bank is the buildout of the first phase of the Mariel Special Development Zone by a subsidiary of Grupo Odebrecht