Piñón on Energy: China taking on strategic role in Cuba

According to a recent Reuters report, Chinese engineering and construction companies, backed by Venezuelan-guaranteed loans, are to build the new Cienfuegos heavy oil refinery and associated industries such as liquefied natural gas and petrochemical plants. These projects signal China’s strategic interest in Cuba.

This relationship would give China a privileged vantage point to identify the various options available in Cuba, particularly in the downstream oil refining sector. Longer term, China could prove to be a very reliable energy partner for Cuba. In a post embargo scenario, Chinese companies could take over Venezuela’s PdVSA equity participation in the Cienfuegos and Matanzas refinery projects.

Cuba is strategically located in waters that are a critical part of regional and global energy security.  A high volume of crude oil, petroleum products and liquefied natural gas is transshipped through the Gulf of Mexico and Caribbean basins, and the Panama Canal. Forty-three percent of the oil refining capacity and 46 percent of the crude oil production of both the United States and Mexico are located along their respective Gulf of Mexico coasts, about 900 miles from Cuba. Colombia, Venezuela and Trinidad & Tobago’s oil refining, oil production, and petroleum export capacity are located along their respective Caribbean coasts, 1,300 miles from Cuba’s southern coast.

Over the next five years, China will be receiving more than 500,000 barrels of oil per day as part of their various joint ventures and loan agreements made to a number of South American national oil companies. They include:

•$36 billion to Venezuela – 400,000 barrels per day. Venezuela’s PdVSA and China’s CNPC signed this past April a $16.3 billion, 25-year joint venture agreement to produce and refine heavy crude oil from the Orinoco’s Junín 4 block.  The goal is for an initial production of 50,000 barrels a day in 2012, to a maximum of 400,000 barrels a day by 2016. This deal is parallel to a $20 billion China Development Bank soft-loan package to Venezuela for energy and infrastructure projects secured against future oil sales from the joint venture.

•$10 billion to Brazil – 200,000 barrels per day. In early 2009, China’s Development Bank loaned Brazil’s Petrobras $10 billion, in return for guaranteed supply of 200,000 barrels of oil a day to China’s state oil firm Sinopec for the next 10 years. The Petrobras-CDB/Sinopec loan will be used to finance Brazil’s exploration of the newly found pre-salt 8 billion barrels of estimated oil reserves deep beneath the ocean floor off its southern coast.

•$1 billion to Ecuador – 40,000 barrels per day. In August of this year, Ecuador’s government signed a loan agreement for $1 billion with the China Development Bank for infrastructure projects.  This loan is to be supported by the sale of 36,000 barrels per day of oil by Petro Ecuador to Petro China.

China has a number of options available on how to monetize this future oil supply. Besides the option of physically importing this crude oil and refining it in yet-to-be-built heavy oil processing capacity in China, the possibility of a regional refining and transshipment center is being considered. Caribbean refining and transshipment capacity would give China the option of supplying the United States. It could take advantage of arbitrage differentials between Europe and the United States and/or the U.S. West Coast and the Pacific Rim, while still shipping most needed distillates and fuel oil to China via the new expanded Panama Canal.

According to press reports, China has been in conversations with U.S. oil refining giant Valero over the acquisition of its 235,000 barrels-per-day Aruba refinery. China has also signed a long-term lease agreement for a 5 million-barrel storage facility located in the NuStar Energy LP Statia terminal on the Dutch Caribbean island of St. Eustatius; both reports underscore China’s interest in the region.

Jorge R. Piñón was president of Amoco Corporate Development Company Latin America from 1991 to 1994; in this role he was responsible for managing the business relationship between Amoco Corp. and regional state oil companies, energy ministries and energy regulatory agencies. 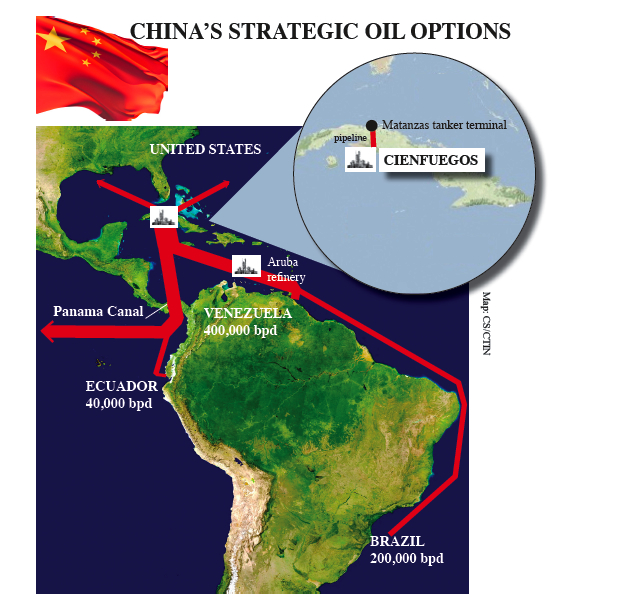 TTop Stories
Providing another example how Cuba is becoming an export platform for the ALBA bloc and beyond, Venezuelan President…
TTop Stories
As it lost a last-instance appeal after a decade-long battle in U.S. courts to keep the Havana Club…
TTop Stories
As part of an overhaul to make Cuba’s healthcare system more efficient, the government is planning to charge…