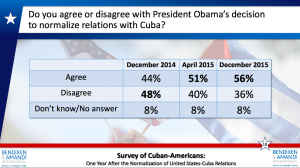 CUBA STANDARD — Bad news for Marco Rubio and Ted Cruz: Most Cuban Americans support President Barack Obama’s normalization policy with Cuba, suggests a poll published by Miami-based Bendixen & Amandi International on Dec. 17, the anniversary of the normalization announcement by the presidents of the United States and Cuba.

The survey’s results suggest that presidential candidates Marco Rubio and Ted Cruz, both Cuban American Republicans espousing hardline views of U.S.-Cuba relations, do not represent the majority views of the Cuban community in the United States.

According to the poll, a clear 56% majority support Obama’s normalization policy, 12% more than a year ago, and 53% of Cuban Americans would like to see the embargo lifted, 9% more than last year. The majority is larger among younger Cuban Americans: Sixty-six percent of those age 18-49 favor an end of U.S. sanctions.

Despite broad support for his policy, 52% of Cuban Americans said they would oppose a trip to Cuba by Obama. The U.S. president announced this month that he would like to visit the island, on condition of progress by the Cuban government on human rights issues.

Opinion: Time to step down from Miami's 'anti' tribune

PPolitics
Claims, human rights, Guantánamo, U.S. policy programs, Radio Marti, aviation and telecommunications are on the agenda, as Cuba insists that all U.S. sanctions must be lifted.
PPolitics
Opponents of U.S.-Cuba normalization have taken full advantage of the fact-free character of recent political debate in the United States to spread a variety of myths. Cuba expert William LeoGrande dispels them
PPolitics
In a campaign-style event at the White House, Trump prohibits U.S. travelers to stay at any state-owned hotels in Cuba.