The project by Britain’s Hive Energy is the first of what Cuba would like to be many 100% foreign-owned renewable energy ventures in the island. However, reflecting the difficult environment for foreign investors in Cuba, the British company had to seek deep-pocketed partners in China
1
Shares
1
0
0
0

RD — During his three-day visit to Cuba, Prince Charles presided over a ribbon-cutting ceremony for a British company’s solar power project at the Mariel Special Development Zone.

Completion of the 50 mw solar farm, estimated to cost $60 million, is expected for December.

The project by Southampton-based Hive Energy is a pioneer, the first of what Cuba would like to be many 100% foreign-owned and operated renewable-energy ventures in the island. However, reflecting the difficult environment for foreign investors in Cuba, the British company had to seek funding and partners in China, after losing a deep-pocketed French partner and facing an uphill struggle to obtain loans from European banks fearful of U.S. sanctions.

In order to get the project off the ground, Hive formed a joint venture with SE Energy Investment Co., a British subsidiary of China’s Shanghai Electric Group Ltd. The joint venture, called Mariel Solar S.A., will be the 100% owner of three utility-size photovoltaic parks with more than 300,000 solar panels on 118 hectares at the Mariel Zone.

Hive’s securing of funding is a major achievement. Because Cuban state utility Unión Eléctrica (UNE) is apparently the sole buyer of the electricity produced by Hive’s photovoltaic parks, and no hard-currency revenue stream is connected to the undertaking, foreign banks are not inclined to lend. Also, out of fear of U.S. sanctions, French and British banks are abstaining completely from Cuba. The consortium’s investment likely is not covered by British state guarantee programs.

This is Shanghai Electric’s second renewable-energy venture in Cuba. Two years ago, the Chinese company partnered with British startup Havana Energy to build a biomass power plant connected to a sugarmill in central Cuba, in a joint venture with a Cuban state company. The entrepreneur and driving force behind Havana Energy, Andrew Macdonald, is now director of Mariel Solar.

“Shanghai Electric hopes this will be a first of many projects in Cuba and the wider region, where all countries suffer from dependence of costly fossil fuels,” said Bo Peng, CEO of SE Energy Investment, in a press release in November, when the Hive-Shanghai Electric joint venture was announced.

Paris-based Mariel Solar S.A. was originally formed in 2015 by Hive Energy and France’s EREN Renewable Energy SA, but the French company dropped out of the partnership in 2017, according to French corporate filings. EREN would have been a deep-pocketed partner, with more than €600 million of shareholder equity; French oil major Total SA bought a 23% stake in 2016, for a reported €237.5 million.

Hive Energy, a pure-play solar operator with projects around the globe, took more than three years to start construction. The tender process began in August 2015, but it took 37 more months until state utility Unión Eléctrica (UNE) and Hive concluded negotiations and secured all permits at the Mariel Zone.

The kw/h price paid by UNE and the duration of the contract were most likely the two major issues of the talks. It is rather unlikely that UNE agreed to a long-term fixed-price agreement or a high price, given the volatile environment of energy prices and the downward trend for solar power production costs.

First of many foreign-owned solar parks?

In 2016, Cuba began negotiations with foreign investors for the construction of 150 mw of utility-scale photovoltaic projects, and another 200 mw may be up for grabs eventually, according to Cuban officials. All these solar farms are to be owned 100% by the foreign entity under build-own-operate (BOO) contracts, with UNE as the sole buyer of the electricity, paying a fixed negotiated rate.

The utility-scale projects are part of an effort to install 700 mw of photovoltaic farms by 2030.

In 2016, Hive Energy’s project leader, Bernardo Fernández, told Cuba Standard that his company was also interested in building and operating 10 photovoltaic parks in western Cuba for a total of 100 mw. 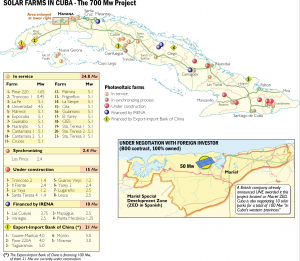 The foreign investment projects join more than 150 mw in solar parks currently under construction by sttate entity EDIFRE. They will be owned and operated by UNE (see map). Using a loan from the Export-Import Bank of China, EDIFRE is planning to build 40 solar farms totalling 100 mw. Construction of 21 mw is already underway. EDIFRE is also building an additional 15 mw worth of solar farms using other funding, including from the Abu Dhabi Fund for Development (ADFD), the International Renewable Energy Agency (IRENA), and most recently the European Union.

Havana Energy is the only other foreign company that is building a renewable-energy project in Cuba, under a 50-50 joint venture with a state company. As a partner of the Biopower SA joint venture with Cuban state holding Azcuba, the company is currently building a 60-mw, $186 million biomass power plant connected to the Ciro Redondo sugarmill in Ciego de Ávila province.

When the Ciro Redondo plant is completed, Biopower is planning to build another biomass plant similar in size at the Mario Muñoz sugarmill in Matanzas province. Eventually, Biopower would like to build and operate five biomass power plants throughout the island, for a total of 300 mw.

CCompanies
State biotech company Labiofam is beginning construction of the first facility for bio-plaguicides and bio-fertilizers in Villa Clara
CCompanies
CUBA STANDARD — Reporting net income of CDN$14.8 million for the fourth quarter of 2021, Sherritt International Corp.…
CCompanies
The equipment maker is preparing to re-enter the Cuban market as soon as possible, and a top executive suggests other U.S. multinationals start getting ready too