Report: U.S. to provide one-fourth of Cuba’s imports by 2020

An economic study by the Paris-based trade credit insurance division of Allianz Group predicts that U.S. exports to Cuba will reach $6 billion by 2020
0
Shares
0
0
0
0

CUBA STANDARD — An economic study by Paris-based Euler Hermes, the trade credit insurance division of Allianz Group, predicts that U.S. exports to Cuba will rise by $1 billion a year to reach $6 billion by 2020, as Washington eases its Cuba embargo.

The report, authored by Euler Hermes economist Daniela Ordoñez, says the United States is positioned to be the “main winner,” possibly covering 25% of Cuba’s imports within five years. 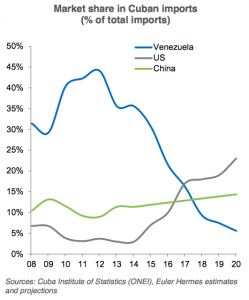 Cuba’s traditional trade partners should also increase their exports, according to the study. China stands to gain $360 million a year by 2020 in additional exports, Spain $200 million, Brazil $120 million, and France $100 million.

Assuming that Cuba will diversify its oil and fuel imports, the report believes that Venezuela stands to lose most, with its exports to Cuba declining from $5.4 billion in 2015 to $1.5 billion in 2020. 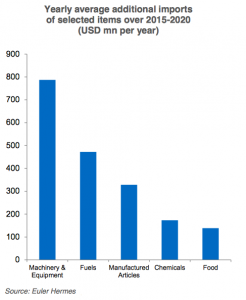 As Cuba is gearing up to produce more exports, requiring more capital goods imports, and as consumption is expected to grow, the report predicts Cuban imports to rise up to 20% per year in real terms. Ordoñez believes imports of machinery and equipment could increase on average by 20% per year over 2015-2020, representing close to 30% of total imports by 2020, and generating $800 million in additional imports per year. More economic activity will also boost imports of fuels by $500 million per year, while higher domestic consumption would generate additional manufactured articles imports of $350 million, according to the report. The development of biotech and pharmaceutical industries in Cuba would support additional imports of chemicals of $200 million per year.

The report predicts that the boost in imports will see Cuba’s trade deficit peak at -18% of GDP in 2018, before declining progressively thereafter, thanks to more moderate import growth and a sustained increase in exports.

“This new landscape will give a tangible boost to the Cuban economy,” Ordoñez said, adding she expects Cuban GDP to accelerate from a five-year average of 2% to 5-6% per year from 2016 to 2020. “This activity will largely be driven by foreign investment, which will grow 15-20% in the coming years.”

Cuba is seeking foreign investment in critical sectors such as biotechnology, construction, energy, food and pharmaceuticals, and it tries to turn the Mariel Special Development Zone into a major cargo traffic hub in the Caribbean. By offering low taxes and fewer regulations, the Cuban government expects to attract enough foreign capital to build industrial factories there.

The Euler Hermes report cautions that due to Cuba’s dual currency system and its pending reform, “currency and financing risks will increase.”

“The anticipated increase in foreign tourism and capital inflows makes unification unavoidable but could push the country toward currency collapse,” Ordoñez said. “In addition, access to credit will remain limited in the short-term as the inter-bank payment system and distribution channels need to be re-established.”

The study predicts that foreign investments will remain tightly controlled by the state, with most foreign ventures requiring majority Cuban ownership, and that the private sector will develop “only gradually”.

“In the short-term, non-payment risks by Cuban companies will remain high,” the report concludes. Euler Hermes continues to rate Cuba in its high-risk “D4” category.