CUBA STANDARD — Following a first decade of exclusively foreign-managed tourist hotels, it’s been more than 10 years now that Cuban state companies have entered the business of operating luxury hotels on the island.

At the end of last year, nearly half the country’s hotel rooms — and one-fourth of four- and five-star rooms — were under Cuban management.

Have state companies learned their trade?

Converting customer comments from TripAdvisor — a public-domain hotel ratings system — into data, two Spanish researchers have found that the performance of Cuban hotel management companies is still lagging behind that of their foreign peers in Cuba.

“Cuban-managed hotels are rated significantly lower than foreign-managed hotels,” concluded Julio Cerviño of Universidad Carlos III in Madrid during a presentation at the annual meeting of the Association for the Study of the Cuban Economy (ASCE) in Miami.

Cerviño and José Antonio Fraiz, of the University of Vigo, put together the study using customer comments about 107 hotels in Havana and Varadero.

However, there are hotel-to-hotel differences in state company performance.

In Varadero, state-managed hotels ranked lower than their foreign-managed peers in all categories of customer service — no exception.

In the ranking of hotel management companies, Habagüanex — the chain that manages historical hotels in Old Havana — was the only state-owned company that broke into the top ten.

State companies Cubanacan, Gran Caribe and Islazul are at the bottom of the ranking.

Cerviño and Fraiz attribute the low ranking, in part, to customer confusion, because most state companies manage a wide range of hotels in different categories, without a clear brand positioning and strategy. In a ranking of individual hotels (see table below), Cuban-managed premium hotels ended up towards the top.

“Cuban hotels seem to be competitive face to face with foreign hotels, particularly in Havana,” Cerviño and Fraiz conclude.

Analyzing TripAdvisor customer feedback by country, the researchers find out — not surprisingly — that foreigners are the most critical customers. Cubans, which represent the fastest-growing customer segment in Cuban hotels, generally gave higher ratings in four of six categories. 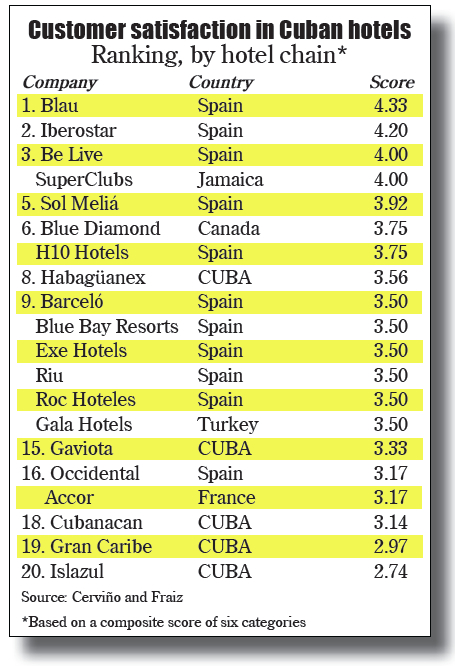 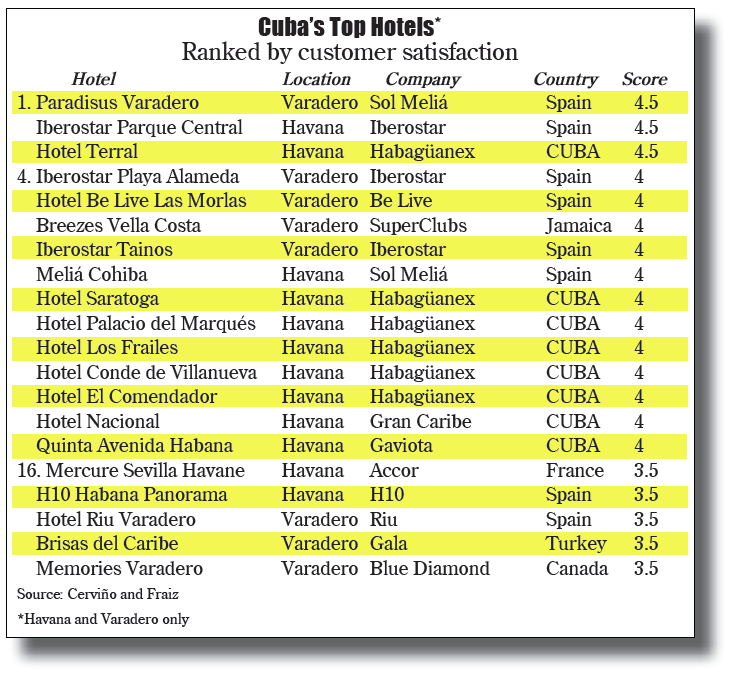