The signing, first reported by Reuters, came after the Singaporean state company in 2010 beat out the world’s largest operator, Dubai Ports, in bidding with the Cuban government. This was followed by a year of negotiations.

PSA, which also operates ports in Panama and Argentina, did not reveal the terms of the agreement. According to Reuters, it doesn’t involve any investments by PSA, but the company is participating in the planning of the container terminal, scheduled to open in 2014.

Cuba is expanding the Port of Mariel, just west of Havana, to relieve a bottleneck at Havana Bay and create the island’s largest cargo port. The $800 million project, funded by Brazil and currently under construction by a subsidiary of Grupo Odebrecht, includes the new container terminal to be operated by PSA, a logistics base for offshore oil drilling, and a food import center, and involves construction of a new road and railroad.

Once the project is complete, giant post-Panamax ships with up to 15 meters draft may dock at the 700-meter long quay of the container terminal at Mariel. The terminal will have an initial capacity of up to 1 million containers, according to an official video on the project. Havana currently has a capacity of 350,000. Mariel is ideally located as a container hub for U.S. Gulf ports and recipient of bulk food imports from the United States.

The government is creating a Special Development Zone, with plans to make Mariel a hub for light manufacturing and warehousing. A Cuban-Russian joint venture also plans to expand a thermoelectric power plant at the port. 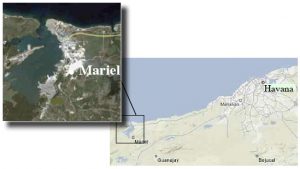 The Economist: If Hugo goes