Boston Consulting Group surveyed hundreds of Cuban consumers. One of their findings: Adidas is the most-recognized brand
0
Shares
0
0
0
0

CUBA STANDARD — With an eye on U.S. corporations preparing to enter the Cuban market, a consulting firm surveyed hundreds of Cuban consumers about their purchasing capacities and habits, and brand awareness.

“U.S. consumer goods companies see a clear opportunity: Cuba’s economy is growing, yet its people still have very little exposure to consumer products and brands, so it remains one of the last true white-space markets on the planet,” says the Boston Consulting Group study, titled Understanding the Evolving Cuban Consumer, in the introduction.

What the researchers found confirms what most Cubans know. As the state continues to control hard-currency retail channels, and in the near-total absence of advertising, foreign consumer goods companies will have to take a long-term view, use existing government channels, and resort to unusual methods to spread the word about their brands, the study suggests.

For the survey, the Boston Consulting Group pollsters personally interviewed 326 heads of households in Havana and 114 in Santiago. Respondents remained anonymous, and the survey focused on a younger Cuban population, while trying to obtain a representative cross-section of state employees, cuentapropistas, remittance recipients, and those who do not benefit from remittances from abroad.

Authors Marguerite Fitzgerald, Jim Brennan and Russell Stokes conclude that consumer goods companies — while tackling stiff regulations and lacking infrastructure — should focus their attention on the “small but growing group of urban, increasingly affluent consumers who have access to private income that supplements their governement salaries.”

Among the study’s findings:

•Purchasing power is 25% higher than official data suggests. The pollsters believe this is due to the “large informal economy that is not captured in government statistics.”

•About 40% of Cubans who live in Havana receive remittances.

•The survey established three consumer profiles: 1. Salaried Cubans who have rarely access to hard currency. 2. The emerging group that complements their government salaries with remittances or other hard-currency income. With an annual income of $600-$700, they occasionally struggle to obtain the basics, but they are generally able to make ends meet. This group represents an estimated 30% of Havana’s population. 3. The self-sustaining group, which may receive a government salary but doesn’t depend on it. This group, which lives off $1,800-$2,000 per year, is able to buy aspirational goods occasionally, and includes cuentapropistas and tourism workers who may also receive remittances, represents up to 20% of Havana’s population. 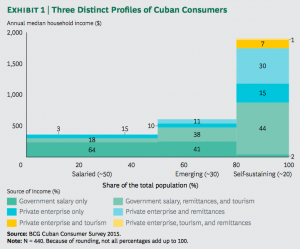 •Thanks to rising foreign investment, tourism and remittances, the emerging and self-sustaining groups will grow, not only in income, but also in share of population. But there are uncertainties, such as emigration of young people, who potentially are the foremost consumers; out-of-control inflation following currency reform; lacking infrastructure; and rigid regulations and government bureaucracy. 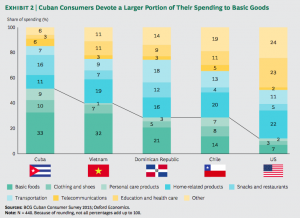 •Cuban consumers — even those in the hard-currency earning segments — spend about half of their incomes on basic needs, a higher ratio than in comparable countries such as Vietnam or the Dominican Republic. In categories such as eating out and snacks, the share of spending among Cubans is higher than in some comparable countries, while their spending on healthcare and education is lower. There is much unmet demand, in part due to lack of income, in part due to limited availability; higher-income Cubans tend to use informal channels to find non-basic goods. 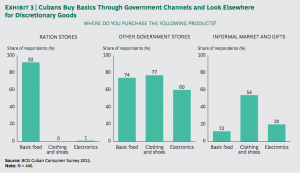 •Cuban consumers have relatively little brand awareness. Cubans buy the goods that are available at state stores, and there is practically no advertising. The lack of brand awareness is particularly true for basic goods such as food and personal-care products. Among those staples, no company has more than 30% brand recognition. “As a result, these product categories are wide open,” the study suggests. “An outside company that can secure the necessary approvals and work with the Cuban government’s heavy degree of distribution control could potentially establish its brands among Cuban consumers.” 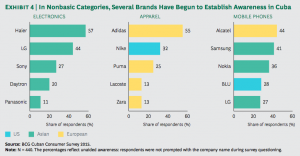 •Cubans show higher brand awareness in discretionary categories such as electronics, apparel, and mobile phones, because they tend to buy those through informal channels that expose them to advertising. For example, 41% were able to name Samsung as a mobile-phone brand.

•The most significant source of brand information are family and friends abroad, followed by Cuban stores, and foreign media, as well as El Paquete, a compilation of pirated movies and TV series episodes delivered on USB drives.

•Even among self-sustaining consumers, only 25% made Internet purchases in the past year. 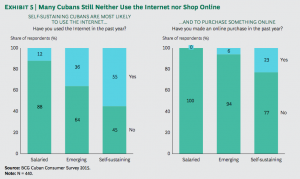 •The hard-currency retail and wholesale infrastructure, imports, as well as pricing are controlled by the government, and it will likely stay that way in the forseeable future. The researchers believe there will be greater market access in the mid-term for foreign companies through wholesale channels, but that retail will remain reserved to Cubans.

In the meantime, the Boston Consulting Group researchers recommend consumer goods companies build good relationships with government-approved suppliers in Cuba, establish their brand among Cuban expatriates — for example in locations such as Hialeah, the most Cuban of Miami’s suburbs — to indirectly reach Cuban consumers, and take a long-term view.

To inspire newcomers, the authors picked three examples that show how to make the best of the current constraints:

•Heineken ceded control of distribution to the Cuban state, providing even refrigerated delivery trucks with the brand logo to the Ministry of Domestic Trade to build brand awareness among Cuban consumers. The company also uses point-of-sale displays and branded events in Cuba. “This approach has helped the company establish a presence on the island and forge relationships that could expand as Cuba’s economy opens,” the study suggests.

•Adidas, which has a long history of providing Cuba’s top athletes with equipment, gained increased visibility thanks to Fidel Castro’s public appearances in a track suit. The company has the highest brand recognition among Cubans, stimulating purchases that are being sent to the island.

•BLU, a Miami-based mobile phone manufacturer, has gained high visibility among Cubans with its low-cost unlocked phones that allow to surf the web at the country’s rising number of WiFi hot spots. BLU, which doesn’t even sell its phones officially in Cuba, enjoys a high brand awareness of 28% because of Cubans in Florida who buy the products and send them to the island.

EEconomy
Cuba could join the Corporación Andina de Fomento (CAF) in a matter of weeks, the head of the multilateral fund told Reuters in an interview
EEconomy
For three days through Saturday, economists, lawyers and other researchers on 19 topical panels will be discussing trends affecting the island's economy
EEconomy
Cuba’s Instituto Nacional de la Vivienda and the two housing laws that have historically been used to manage Cuba’s housing stock seem to be heading in the same direction as Cuba's military icons: They may never die; they are just fading away