In a campaign-style event at the White House, Trump prohibits U.S. travelers to stay at any state-owned hotels in Cuba.
0
Shares
0
0
0
0 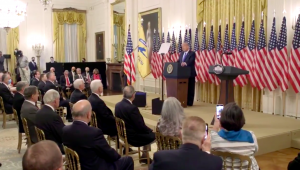 CUBA STANDARD — Amid an uphill battle for his re-election, President Donald — in a campaign-style event at the White House speaking to 23 Bay of Pigs veterans and their families — announced a series of new restrictions for U.S. travelers to Cuba.

Effective immediately, U.S. visitors to Cuba will not be allowed to stay in any of the more than 400 state-owned hotels, restricting lodging options to privately owned bed-and-breakfasts and AirBnb properties. Trump also prohibited stays at private b&b’s owned by government officials and their close relatives. In addition, travelers are not allowed to bring back rum or tobacco products anymore.

Finally, the new restrictions will require U.S. participants of conferences, workshops, exhibitions and sports events to apply for a specific license with the U.S. Treasury Department. This kind of travel had been subject to a blanket authorization introduced under the Obama administration.

The new regulations will be published in the Federal Register Sept. 24.

“President Trump is way off, if he assumes the mercenaries defeated at [the Bay of Pigs] will get him re-elected to the White House,” responded Foreign Minister Bruno Rodríguez in a tweet. The Bay of Pigs “was a defeat for the United States.”

“This announcement, just weeks before the presidential election, shows what the Trump administration’s Cuba policy is really about,” said Collin Laverty, president of Miami-based Cuba Educational Travel. “It’s about South Florida and it places absolutely no importance on the well-being of the Cuban people, democracy, human rights or advancing U.S. national interests in the region.”

In a speech moving back and forth between foreign policy and campaigning, Trump promised “a fully free hemisphere for the first time in human history,” “sooner rather than later”.

“Today, we reaffirm our ironclad solidarity with the Cuban people and our eternal conviction that freedom will prevail over the sinister forces of communism and evil of many different forms,” Trump said in announcing the sanctions.

“We work for the day when this will become a fully free hemisphere. And it will be, for the first time in human history, a fully free hemisphere. And we will have it. We will have it. And it’s going to happen. It’s going to happen sooner rather than later. A lot of things are going on. A lot of things are going on right now that I can’t tell you about, but I will be soon,” he said to applause. “The Obama-Biden administration made a weak, pathetic, one-sided deal with the Castro dictatorship that betrayed the Cuban people and enriched the communist regime.”

Trump seemed to suggest protesters in U.S. cities are communists.

“Today, we proclaim that America will never be a socialist or communist country. And I’m going to add that word, ‘or communist.’ It’s the first time I’ve ever said that. I’ve never added the other word, but I think it’s appropriate, when you look at the kind of ideology we’re also facing; when you see the rioters, looters, anarchists, and then you see the press — the media — play right into their hands. It’s so sad to see the media, the way they’re being used. The media is being used. Like fools, they’re being used. And it’s very sad to watch. But we will prevail. It’s the first time I’ve said that though, ‘socialism and communism’.”

The president’s speech came a couple days after the Miami Herald reported that in 2008, the Trump organization filed for a series of trademark protections in Cuba for its businesses, including for “investment in real estate,” “beauty contests,” “golf courses”, “casino game services”, “montage of television programs”, and “hotel services”.

Recent additions to the body of U.S. sanctions include a stop to all charter and scheduled flights to destinations in Cuba except Havana; the blacklisting of Fincimex, the state entity that has been channeling remittances to recipients in Cuba; and the capping of remittances to $1,000 per quarter.

The Trump administration has also blacklisted shipping and other companies that facilitate Venezuelan oil shipments to Cuba.

UUncategorized
By José M. Pallí, Esq. The last week of July, the Association for the Study of the Cuban…
PPolitics
CUBA STANDARD — A Senate bill originally introduced in 2019 by a bipartisan group of legislators that would…
PPolitics
All possible scenarios of the Venezuelan crisis hinge on one key factor: A coherent coup d'etat by the armed forces involving the entire chain of command.