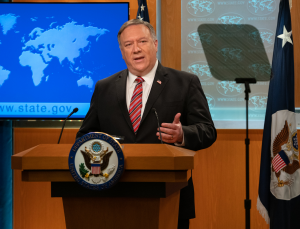 CUBA STANDARD — Ratcheting up its pressure on Cuba, the Trump administration said the island is “not fully cooperating” with the United States’ counter-terrorism efforts.

The move stops just short of returning Cuba — after a five-year hiatus — to the State Department’s list of “terror-sponsoring” nations.

The announcement seems to go counter the United Nations’ urging the United States to provide sanctions relief to nations reeling from the fallout of the COVID-19 pandemic.

The State Department’s move also comes days after an individual strafed the Cuban embassy in Washington with automatic-weapon fire; Cuban officials allege the man was prompted to action by the Trump administration’s anti-Cuba rhetoric.

Rather than triggering specific changes in Cuba’s economic and financial interactions with the world, the new status instills fear in its business partners and worsens the overall business atmosphere for cash-strapped Cuba, just as it is preparing to reopen for tourism.

In a press release May 13 announcing Cuba’s new designation, the State Department pointed out that the certification is supposed to notify “the U.S. public and the international community”.

The same day, a Trump administration official told Reuters, on condition of anonymity, that there is a “convincing case” that Cuba should be returned to the U.S. blacklist.

“Why don’t journalists ask the ‘leaker’ why US unilaterally froze a MOU on Law Enforcement signed w/ Cuba with a chapter on the subject?”, Ramón Cabañas asked in a Tweet, in response to the Reuters report.

The Cuban ambassador in Washington was referring to a memorandum of understanding on cooperation against “transnational crimes, including but not limited to terrorist acts” signed Jan. 16, 2017, the last week President Barack Obama was in office. The memorandum was one of many cooperation projects on the normalization agenda the Trump administration put on ice.

A return to the “State Sponsors of Terrorism” list would entail a strict ban on exporting arms and very strong controls on potential “dual-use” items, which extends into the bio-medical sector. A blacklisting would also force the U.S. state apparatus to block any kind of economic assistance, including multilateral aid or loans. This means Cuba’s benefiting from, a even joining of, multilateral organizations such as the World Bank, IMF or Interamerican Development Bank would be blocked.

It remains to be seen whether the “non-cooperation” designation will affect Cuba’s participation in multilateral organizations, such as in the Central American Bank for Economic Integration (CABEI), in which the United States is not a member.

No matter whether the U.S. government certifies non-cooperation or actually blacklists Cuba, third-country commercial banks dealing with the island will be even more reluctant to engage in transactions with Cuba-related entities.

The new status could also make transactions related to U.S. travel more difficult. The only U.S. bank that provided a direct channel for payments to Cuban entities by U.S. travel companies already suspended its activities months ago; U.S. businesses have since had to seek the services of third-country banks, which might be even more reluctant now.

A blacklisting would also prevent Florida researchers and students from traveling to Cuba using public universities’ funds. A Florida law prohibits the use of public funds in countries on the “terror” list.

In the press release, the Department of State said it notified Congress May 12 that it believes Iran, North Korea, Syria, Venezuela and Cuba were “not cooperating fully” with U.S. counterterrorism efforts in 2019.

The State Department accuses Cuba of continuing to host members of a Colombian rebel group that was engaged in peace negotiations with the Colombian government in Havana, after the talks fell apart following an attack in Colombia that killed 22; the successor administration to the government that initiated the peace talks has asked for the extradition of the rebels in Cuba, but Cuba refused to extradite the ELN leaders, saying it had to adhere to the promises it made before the talks. Cuba is part of a group of countries, including Norway, that have promoted and helped the Colombian peace talks.

The State Department also accuses Cuba of failing to extradite U.S. fugitives, including a U.S. citizen who was convicted in the killing of a New Jersey state trooper in 1973.

Although there is no extradition treaty, Cuba has deported U.S. fugitives of law over the last few years.

The Obama administration removed Cuba from the list in 2015, adding to atmospheric improvement amid a normalization process.

TTop Stories
In a flashback to the violent 1970s and 80s in Miami, state and federal investigators — including FBI…
TTop Stories
Giving Cuba’s pharmaceutical exports a major boost, Ecuadorean President Rafael Correa pledged his country would buy up to…
TTop Stories
CUBA STANDARD — As a second wave of contagion is beginning to flatten, but before reaching the benchmarks set by a…