CUBA STANDARD — It’s more than a year late, it’s small, it’s not the first U.S. venture at the Mariel Special Development Zone, and commercialization of its products is — at best — years and hundreds of millions of dollars worth of clinical testing away. Still, promoters of U.S.-Cuba normalization say the biotech joint venture just set up between a U.S. research institution and the commercial arm of Cuba’s Centro de Inmunología Molecular (CIM) is a political milestone amid tightening U.S. sanctions.

“Our two countries stand to gain immeasurably from closer ties, be in the field of biotech, education, sports, commerce, or the arts,” said the Washington-based Center for Democracy in the Americas in a statement. “Today’s announcement is an unmistakable example of the good that can come from U.S.-Cuba engagement.”

“This is a momentous step forward on one of our most significant undertakings,” said Roswell Park President and CEO Candace S. Johnson. “With the establishment of this company, we are entering a critical new phase of Roswell Park’s collaboration with these innovative Cuban scientists.”

In a press release, Roswell Park said that “initial results from the first North American clinical trial of CIMAvax-EGF show that this Cuban-developed immunotherapy is safe, well tolerated and worthy of further study”.

Roswell Park Principal Investigator Grace Dy shared the findings of Phase 1 trials at a meeting of the International Association for the Study of Lung Cancer in Toronto. Phase 2 trials are planned to begin late this year.

The joint venture company will conduct the next clinical trials of CIMAvax, as well as research studies of other drugs. It will also seek U.S. FDA approval if advanced-phase clinical testing has a successful outcome, seek patent protection, seek sub-licensing for its intellectual property rights, and, if commercialization begins, facilitate the import and distribution of products to the United States. 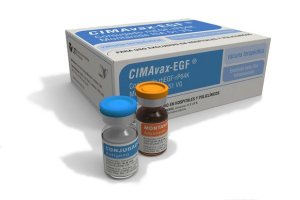 More drugs in the pipeline

In addition to CIMAvax, Roswell’s joint venture with the commercial arm of the Havana-based Centro de Inmunología Molecular (CIM) has three more Cuban-developed cancer drugs in the pipeline — IL-2 mutein, VSSP and another investigational immunotherapy that targets tumor-associated gangliosides. All four immunotherapies are designed to enhance the body’s cancer-fighting self-defense system, alone or in combination with other immunotherapies.

Roswell Park expects additional Phase 1 trials for these drugs, enrolling more than 100 patients in the United States within the next three years, with plans for additional clinical studies to follow.

“While these agents are still investigational therapies in the United States, evidence to date strongly suggests that all four are worthy of further study in several cancer types,” Roswell Park said in a press release. “Roswell Park and its partners are committed to working together to determine their true potential for controlling cancer and improving patient outcomes.”

David Allan, a Canadian venture capitalist who brought CIMAvax to clinical testing Canada and the United States in the 1990s and early 2000s, points at the odds the partners are facing.

“Roswell’s initiative, while interesting, should definitely not the considered as ‘game changing’, and enthusiasm for its prospects must be tempered with the recognition that more than 85% of cancer therapies in early-stage development fail to achieve FDA approval,” Allan wrote in an email to Cuba Standard. “Readers may also wish to be mindful that there are a reported 61,158 oncology drugs in current development, suggesting a highly competitive environment populated by the most prestigious cancer research hospitals in the world and hundreds of well-financed corporations.”

Allan calculates that the joint venture will have to raise some $25,000 per patient in clinical testing.

Roswell Park Chief of Business Development Thomas Schwaab, who is also in charge of the commercial arm of the institution, Global Biotechnology and Cancer Therapeutics (GBCT) — set up a separate entity, GBCT II LLC, in the effort to entice investors to provide hundreds of millions of dollars needed to advance expensive Phase 3 clinical testing of CIMAvax. So far, some $4 million in donations have funded Phase 1 trials.

Schwaab did not immediately respond to inquiries. During a forum in New York City in February 2017, he announced that the commercial arm of the nonprofit was seeking investors, adding that he hoped the joint venture would be set up by April 2017.

“The Cubans said, ‘hey listen, we’d really like to be able to make some money off this biotechnology,” Schwaab said during that forum. “So we tried to figure out how we can create a partnership that allows us to do that, not only to bring Cuban biotechnology to the U.S., but also to continue to co-develop completely new cancer vaccines for the U.S. market.”

Schwaab said at the event that he was reaching out to U.S. and multinational pharmaceutical companies as a first line of prospective investors.

The obstacles were not only on the U.S. side.

“I’ve had a number of conversations with American-based investors that are all very, very excited about that, with one exception: ‘What’s the safety for my investment?’,” Schwaab said. “So we had to have conversations in the middle of the negotiations for the agreement, all the way up to the Cuban ministries of health and trade and foreign investment, to have them understand what U.S.-based investors are really looking for.”

“I’ve been going back and forth on a weekly basis over the past six weeks to Cuba, to negotiate,” Schwaab said at the event. “It’s a work in progress. We’re definitely challenging Cuban policy. Not Cuban law, but Cuban policy and Cuban comfort zones.”

“On the Cuban government side, everyone has signaled to us they really want this to happen,” he added.

Roswell Park in 2016 obtained a general license by the Office of Foreign Assets Control (OFAC) that allows it to perform clinical testing in the U.S. and import the Cuban drugs to do this, as well as a specific license that allows the creation of the joint venture, including employment of both Cuban and U.S. citizens at Mariel and operating a satellite office in Buffalo. Roswell Park also said it received permission from the Bureau of Industry and Security (BIS), the U.S. Department of Commerce, and the U.S. FDA.