CUBA STANDARD — In another round in the gradual easing of U.S. sanctions, the Obama administration published amended regulations effective today that allow U.S. companies to sell a broader range of goods to Cuba — including on credit and to state companies — and permit airlines to interact with Cuba on a broader base.

After publishing easing measures in January and September 2015, this is the third time the White House is amending U.S. sanctions regulations since the normalization announcement on Dec. 17, 2014.

In the absence of substantial movement in the U.S. Congress towards easing or lifting the embargo, the move suggests President Barack Obama, during his last year in office, is continuing to use his executive power to open more channels for U.S.-Cuba interaction.

“After 50 years of regulatory inertia, I am pleased to see a sustained effort to ease antiquated travel and trade restrictions toward Cuba,” said Sen. Jeff Flake (R-Az), a long-time advocate of normalization. “Hopefully, such progress in the effort to normalize U.S.-Cuba relations spurs Congress to consider more permanent solutions, starting with legislation to restore the freedom of U.S. citizens to travel to Cuba.” 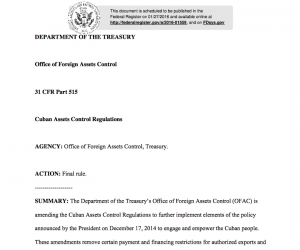 “Just as the United States is doing its part to remove impediments that have been holding Cubans back, we urge the Cuban government to make it easier for its citizens to start businesses, engage in trade, and access information online,” National Security Council Spokesperson Ned Price said in a statement.

Obama is considering a visit to Cuba early this year.

For one, in a major disappointment for U.S. agribusinesses which have been lobbying hard to lift sanctions, financing and payment restrictions still apply to agricultural exports, which will most likely continue to make up the bulk of U.S. sales to Cuba.

While applauding the changes, the co-chair of the Washington-based U.S. Agriculture Coalition for Cuba (USACC) criticized the measures’ exclusion of credit for agricultural sales.

“We should not exclude agricultural products,” Paul Johnson wrote in an email message to Cuba Standard. “Building a healthy agriculture policy with Cuba benefits not only U.S. agriculture, but the lives of every Cuban. Food and improving agriculture systems should not be used as a stick in our efforts to build improved relations with any country.”

Also, companies seeking to sell other goods and services have to apply for a license on a case-by-case base, providing proof their exports meet “the needs of the Cuban people”. All sales to state companies that would “primarily generate revenue for the state” will still be denied, OFAC and BIS said in a joint press release, citing as examples sales to state companies in the tourism industry and “those engaged in the extraction or production of minerals or other raw materials”.

Anticipating a bilateral aviation agreement and ferry service, the new rules allow U.S. airlines to buy and sell blocks of seats, and enter into code-sharing and leasing arrangements with Cuban airlines, and authorize all travel and transactions involving the “temporary sojourn of aircraft and vessels”.

Commerce Secretary Penny Pritzker described the new measures as an outcome of a regulatory dialogue with the Cuban government that began during her visit to Cuba. In October, Cuban authorities made it clear that purchases from U.S. companies were impossible under existing U.S. restrictions.

“Following the first-ever U.S.-Cuba regulatory dialogue and my fact-finding trip to Cuba in October, we have been working tirelessly to maximize the beneficial impact of U.S. regulatory changes on the Cuban people,” she said in a prepared statement.

The most relevant changes for U.S. businesses include:

•New types of export goods: BIS will examine license applications for exports of “items to meet the needs of the Cuban people” on a case-by-case basis, including sales to state companies. BIS lists as examples “items for agricultural production; artistic endeavor (including the creation of public content, historic and cultural works and preservation); education; food processing; disaster preparedness, relief and response; public health and sanitation; residential construction and renovation; public transportation; and the construction of infrastructure that directly benefits the Cuban people (e.g., facilities for treating public water supplies and supplying energy to the general public)”.

•Agriculture sales: BIS will now “generally approve” license applications for sales of agricultural goods not included in the exemptions list, such as insecticides, pesticides and herbicides.

•Payment for exports and financing: U.S. banks are allowed to provide financing, such as letters of credit, for new types of exports. However, statutes force OFAC to continue enforcing restrictions on sales of agricultural goods, Treasury said in a press release. Agricultural sales still have to be cash-in-advance or financed through a third-country letter of credit, payable upon arrival of goods at a Cuban port.

•Air travel: BIS promises to “generally approve” license applications for items related to international airline operations, including the export of aircraft leased to Cuban state airlines. “The entry into blocked space, code-sharing, and leasing arrangements to facilitate the provision of carrier services by air, including the entry into such arrangements with a national of Cuba, will be authorized,” the OFAC-BIS press release said.

•Media, film and art production: OFAC now allows all professional travel related to news gathering, film production, music production and the like, as well as the employment of Cuban nationals, and the remittance of “royalties or other payments” in connection with media or arts activities.

•Conference and event organizers: OFAC now allows application-free travel for professionals to organize conferences, music events, athletic events and the like in Cuba.

Opinion: A year goes by